I’m continually amazed by the availability of high-quality (if sometimes idiosyncratically framed) architectural images through Google’s street view. Finding public domain or Creative Commons images can be difficult when publishing architectural critiques and the copyrighted alternatives can be expensive — the screen captures (or screen recordings) made possible through the street view app are an under-appreciated resource!

I made this video of the Piazzetta San Marco in Venice simply by using the screen recording (Command-5) feature on my Mac. The recording itself contains the required attribution [image capture Sep 2018 © 2022 Google]; no other permissions are needed to use such material online or in print.

This cover is based on the Willie Nelson version of “Almost On My Mind,” released in 1982, ten years after the song was first released by others, including Elvis (who had the first hit with it), Brenda Lee (my personal favorite), and Gwen McCrae (who actually released the first version of the song in 1972). I’ve been recording covers of songs chronologically, starting with “Surfer Girl” from 1963 — one song chosen per calendar year — but I made an exception and recorded this 1982 version of “Always On My Mind,” even though I had already covered “Tainted Love” from the same year. The reason had something to do with a costumed Halloween wedding party to which I’ve been invited by my talented niece; since I’m going as Willie Nelson, I figured I should at least learn one of his songs* and, well, one thing led to another. I found and purchased the Willie Nelson wig and headband online for the Halloween costumed wedding party taking place next week. It also occurred to me that this song — about experiencing regret in the world of love — is, to that extent, similar to one of the first songs I ever wrote: “Almost Doesn’t Count.”

This cover of “Always On My Mind” is recorded live with piano and vocal; guitar, drums, bass, and organ are added later, along with a touch of backup vocals near the end. As usual, drums, bass, piano, and organ are all played live on my MIDI keyboard using software instruments provided in Logic Pro. The video clips were shot live (except for the close up head shots, which are lip-synced) with my iPhone and edited with Final Cut Pro.

All of my original songs and covers are linked from my music page.

* This song was not actually written by Willie Nelson, but is credited to Wayne Carson, Johnny Christopher, and Mark James.

Well, I’m up to 1983 — a year I was looking forward to — since it means I get to cover “I Guess That’s Why They Call It the Blues,” the classic 1983 hit song written and performed by Elton John (with Davey Johnstone getting some of the music credit and Bernie Taupin writing the lyrics).

I basically recorded the piano and vocals live (filming with my iPhone), and then went back and added some backup vocals and “software instruments” (drums and bass) played live on my midi keyboard.

More songs and videos can be found here.

It occurred to me that architectural detailing can be understood as a kind of “rock paper scissors” game. In this iteration of the game, glass beats stone (Wright’s Falling Water on the left); stone beats wood (Cornell Architecture, Sibley Hall basement, in the middle); and wood beats glass (St Clement’s Church, Hastings, UK, on the right).

I’ve written and recorded my first post-retirement song. It’s an extended metaphor about getting old, based on the game of chess — specifically, the “endgame.”

Links to all my music and music videos can be found here.

The following thought experiment is based on 2018 statistics, which are the latest that I could find (so when I say “current,” I am referring to 2018 values).

[Updated below] Analysis and commentary in US public media most often compare the total greenhouse gas emissions (CO2e) of China and the US, abstracting from the fact that China has more than 4 times the population of the US. (Also typically left out of such commentary is the enormous historical contribution by the US to CO2e in the atmosphere.) From this misleading standpoint, one constantly is reminded that China emits more than twice as much CO2e as the US.

But from a per capita standpoint — the only rational way to compare the two countries with respect to their contribution to climate change — China emits less than half as much CO2e as the US.

Even if the US lowers its emissions by 40% compared to 2005 levels — the optimistic estimate based on implementation of the Inflation Reduction Act of 2022 — its per capita emissions would still be 27% higher than China’s current emissions, per capita.

In fact, the US would need to lower its current emissions (which are already 10% lower than its 2005 emissions) by an additional 48% just to match China’s current per capita emissions.

Here are my calculations, and sources:

Updated 16 September 2022: Here is a typical and egregious example of how China is portrayed in US media as “the world’s largest climate polluter” even though its per capita contribution to CO2 is much less than that of the US and, in fact, lower than that of 41 other nations (according to 2016 data).

From David Wallace-Wells, “China Is Writing the Story of the Climate Future,” NY Times, Sept. 14, 2022: “China is not just the world’s largest climate polluter but is responsible now for about half of all global coal use and almost a third of all global carbon emissions — a growing share, and more than twice the American contribution. (Though on a per-capita basis, the United States is still doing much worse.)”

The article does disclose that “on a per-capita basis, the United States is still doing much worse,” but only as a parenthetical remark, as if this admission can be taken as not particularly important.

Title: “Building Bad: How Architectural Utility is Constrained by Politics and Damaged by Expression”

In a free, live, virtual “Chats in the Stacks” book talk, Jonathan Ochshorn discusses his latest book, Building Bad: How Architectural Utility is Constrained by Politics and Damaged by Expression (Lund Humphries, 2021), where he examines how utilitarian function in architecture can be thwarted by political and economic forces, and undermined by artistic expression. In considering several contemporary buildings and projects, Ochshorn avoids advocating for a specific style or practice but provides an objective framework for analyzing architecture through the lens of utility.

Sponsored by the Mui Ho Fine Arts Library, Cornell University, the talk is followed by a live Q&A.

I wrote an op-ed that was just published in The Architect’s Newspaper with the rather unwieldy, but nevertheless accurate, title, “Bad Building: Architecture’s Aesthetics Should Support, rather than Sabotage, a Building’s Function.” The argument in the op-ed derives from my book, Building Bad: How Architectural Utility is Constrained by Politics and Damaged by Expression.

[Updated below, June 8, 2022 and July 17, 2022] This morning, I sent an email to Cornell facilities and accessibility staff, as well as the Ithaca Building Division, alerting them to “protruding objects” on the Arts Quad:

To all concerned with access compliance on the Cornell campus:

I noticed today (June 4, 2022) that guy-lines stabilizing a Cornell Arts Quad tent are in violation of ADA and NYS Building Code requirements for access along circulation paths. They constitute “protruding objects” and, as such, are illegal and dangerous. 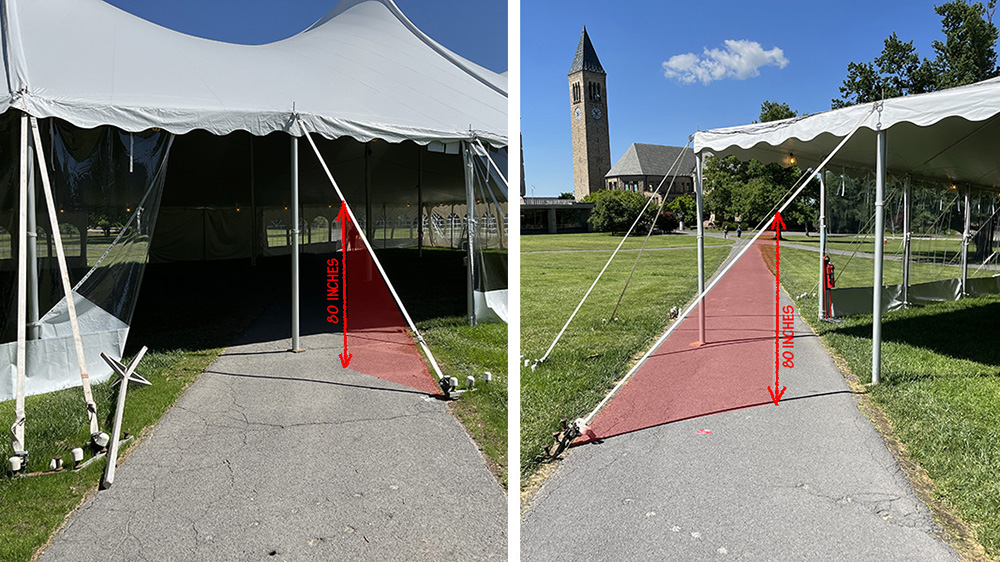 [June 8, 2022 Update] Cornell has placed cane-detection barriers in front of most, but not all, of the noncompliant guy-lines on the Arts Quad. In the photo below, the circulation path is protected in one direction only: 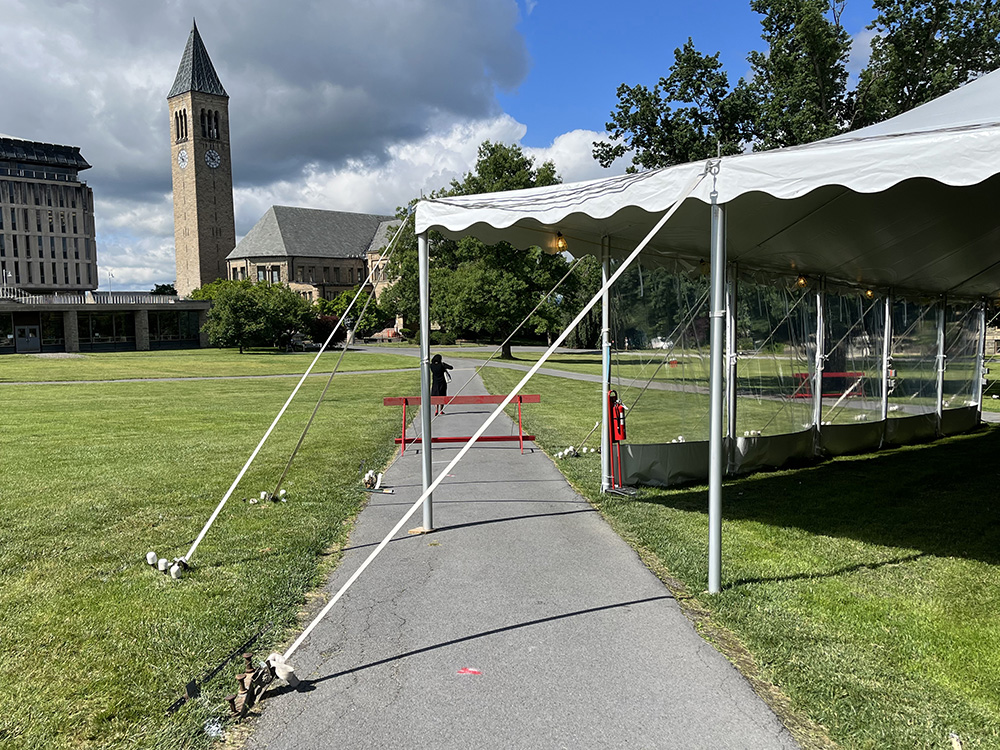 [July 17, 2022 Update] A new tent has been set up on the Arts Quad (see image below), and it has the same issue with ADA noncompliance as was discussed in the June 8, 2022 update above: the cane detection barrier works from the outside-in, but not from the inside-out. Clearly, people move along circulation paths in two directions, and ADA compliance is required for both of them! Guy-lines that stabilize tents become noncompliant protruding objects when they pass through circulation paths between the heights of 27 inches and 80 inches.

I’ll be giving a talk on “Control Layers, Abstraction, and Utilitarian Dysfunction,” based on my book, Building Bad: How Architectural Utility is Constrained by Politics and Damaged by Expression. Details follow:

This continuing education program is FREE for CSI members, and $20 for non-members (Notice: Any money raised will go towards the Edward Goldberg Memorial Scholarship Fund). This program has AIA Continuing Education Credits PENDING (1 LU/HSW Credit).

Sponsored by the Syracuse Chapter of the Construction Specifications Institute (CSI)

Information about the book is here.