[Updated May 5, 2022 (scroll to bottom)] Two years ago, I wrote to administrators at Cornell University, advising them that “protruding objects” designed into a food truck behind Milstein and Sibley Halls were in violation of the ADA as well as the New York State Building Code. 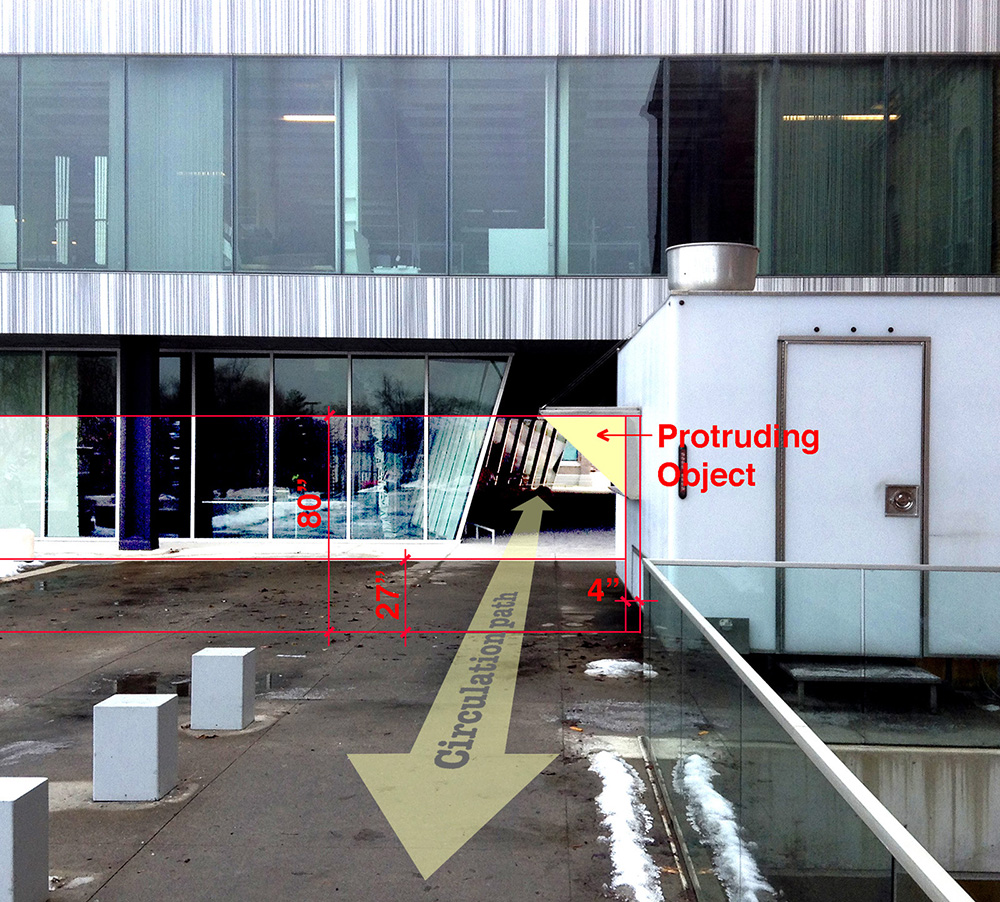 This image shows the protruding objects in the circulation path by the food truck behind Sibley/Milstein Halls at Cornell (photo and annotations by J. Ochshorn)

On the two-year anniversary of my first email, I again requested that Cornell remediate this illegal and dangerous situation, embedding several annotated photographs into my Jan. 14, 2022 email that illustrate one possible method of permanently fixing this problem: 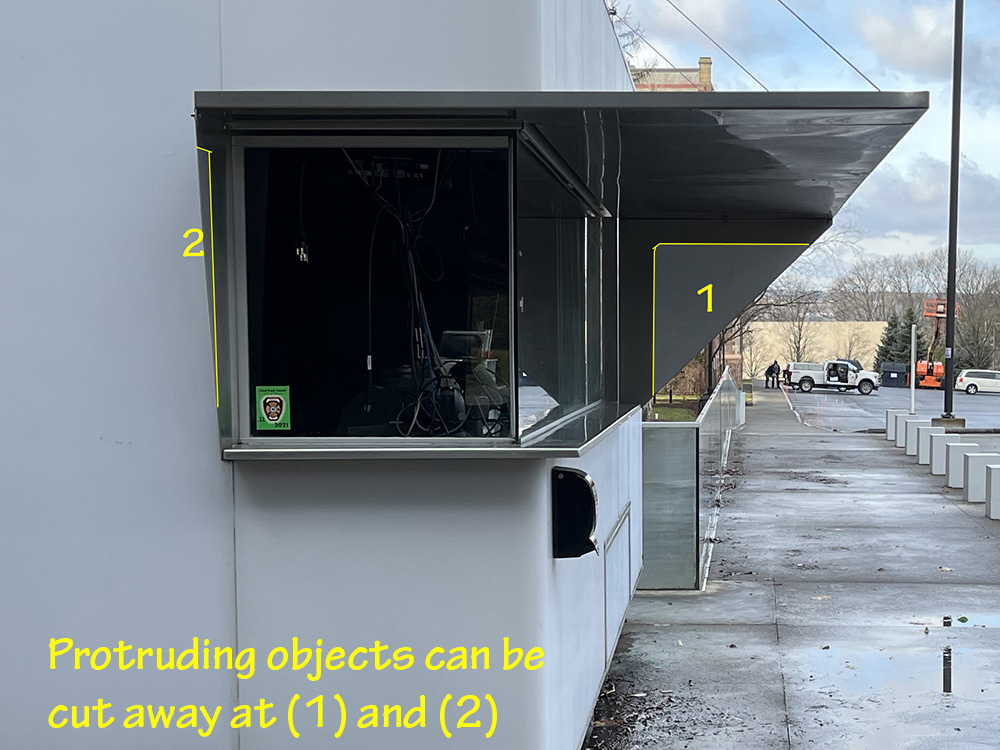 Metal “fins” attached to the food truck behind Milstein/Sibley Halls at Cornell University could be altered to comply with ADA requirements.

Metal “fins” on the food truck could be cut in order to comply with ADA guidelines for protruding objects.

“Before” and “after” images showing proposed remediation of protruding objects on food truck behind Milstein/Sibley Halls at Cornell University (photos and Photoshopping by J. Ochshorn).

[May 5, 2022 Update] Soon after my January 14, 2022, email, a moveable sign was placed under one of the noncompliant protruding fins (image below), something clearly inadequate, since the sign could be (and was) moved from its intended position. I complained about the inadequacy of this remedy. 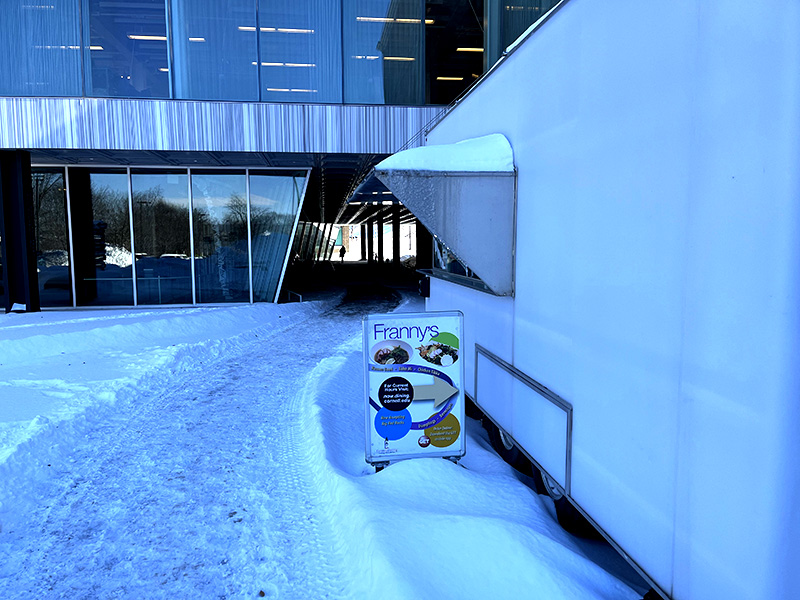 Amazingly, a few months later — about 4 months after my January 2022 design suggestions and more than two years after my initial complaint — I discovered that the noncompliant metal fins had been trimmed, pretty much as I had specified in my photoshopped renderings: the newly-compliant food truck is shown below. 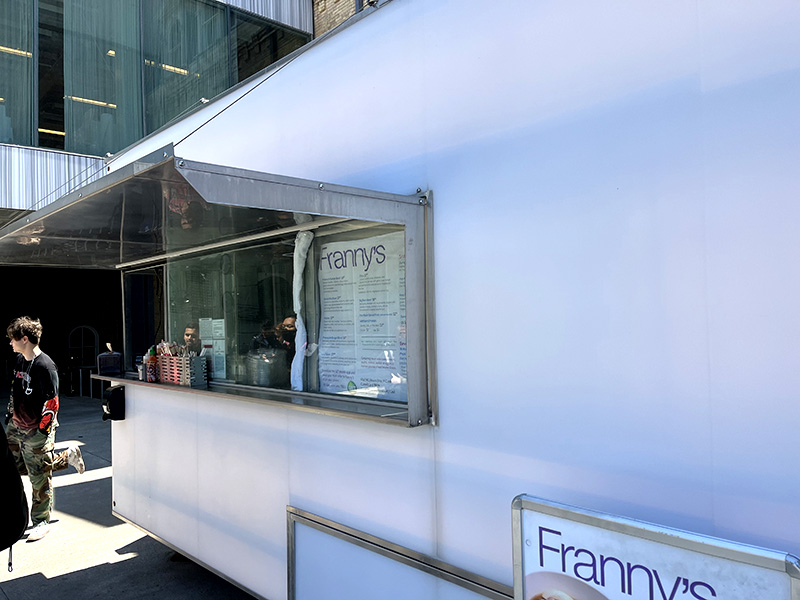 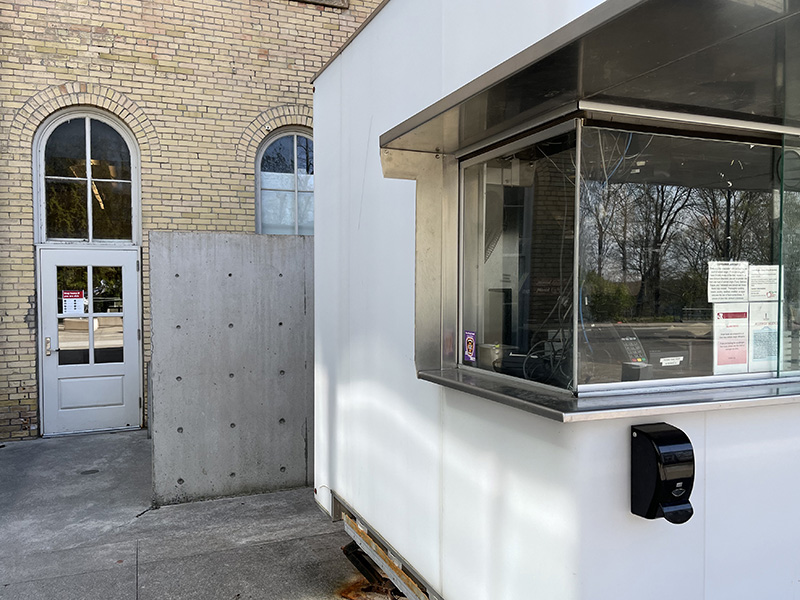 I just recorded a cover of Tainted Love, the 1982 U.S. hit by the English synthpop duo, Soft Cell. It turns out that this song, written by Ed Cobb, was recorded back in 1964 by Gloria Jones, but I never heard that version until recently. My version doesn’t have much in common with either the 1964 or 1982 recordings, probably because it’s the lyrics rather than the music that always intrigued me about this song: such an interesting way of characterizing a damaged (‘tainted”) relationship!

I recorded the song essentially live (vocals and keyboards) over a click track; then created drum, bass, and organ tracks using “software instruments” in Login Pro, played “live” on my Yamaha MIDI-enabled keyboard, and finally added some backup vocals. The glass curtain wall that I added to the video in Final Cut Pro is actually the north wall of Milstein Hall at Cornell University — looking into the basement auditorium — designed by Rem Koolhaas and OMA.

Find links to all my songs and music videos here.

See links to all my posts and writings about the Fine Arts Library here.

That’s right: just a black cat on Giles Street in Ithaca, NY, making his/her (do I use “their” for cats?) way along the edge of 6-mile creek gorge.

The Milstein Hall “dome” or “crit room” takes the form of a whispering gallery, where sound is projected, reflected, and reinforced in a surprising and dysfunctional manner, such that the utilitarian function of the space — to hold critiques, receptions, and other events — is compromised. This lack of attention to the acoustical quality of the space reflects the architects’ evolving ideology rooted in formal expression, abstracted from most utilitarian considerations. Aside from its acoustic shortcomings, the crit room was also designed and built with only a single compliant fire exit, even though its occupancy and floor area required three such exits. (Cornell was forced to provide these missing, but required, exits by literally cutting through a reinforced concrete and glass wall that had originally been designed to separate the crit room from the adjacent auditorium.)

Thus, Milstein Hall’s crit room — its “dome” — is a perfect example of a space in which architectural utility is doubly damaged: first by utilitarian dysfunction (inadequate exits) and second, by the competition driving dysfunctional expression (resulting, here, in an acoustical travesty).

It it therefore fittingly ironic that the AAP “Launchpad” event, in which my book — Building Bad — will be one of eleven AAP faculty books being “launched,” has been scheduled for Monday, Oct. 25, 2021, from 5:00 pm – 7:00 pm, precisely in this dysfunctional space. Faculty presenters were asked to prepare a 5-minute Pecha Kucha-style slide show, but I was given permission to show a 5-minute music video instead, based on a song that I wrote to celebrate the publication of my book.

I announce this with great trepidation, since there is no way to know how badly the acoustic qualities of the crit room space will mangle whatever musical qualities the song possesses. I therefore recommend that you not only attend the Launchpad event if you are in the Ithaca area (after all, there will be food and drinks served in that dark and abysmal space with the plastic bubbles that has been rebranded as the “Duane and Dalia Stiller Arcade” at 5:00 pm) but that you also check out my “Ballad of Building Bad” music video with headphones or an adequate sound system.

In anticipation of the official U.S. release of my book, Building Bad, on Sept. 30, 2021, I made a more fully orchestrated version of my song, Ballad of Building Bad, along with a new, more elaborated, music video.

The original “live” version of the song, along with some fun facts and lyrics, can be found on this prior blog post.

Links to all my music and music videos are here.

Unbeknownst to me, when I started writing this ballad, it took the form of a Shakespearian Sonnet, with these two modifications: (1) instead of three quatrains (abab, cdcd, efef) in each verse, there are two (abab, cdcd), followed, as in the Shakespearian model, by a couplet (gg); and (2) the accent in Shakespeare’s classic iambic pentameter (“Arise, fair sun, and kill the envious moon“) is reversed, so it is more like trochaic pentameter (“Toxic smoke quickly fills the room“). And as the lines in my verses get elaborated, the meter becomes harder to detect, but it’s there!

Links to all my music and videos can be found here.

After what seemed like a long editorial process — copyediting, queries and responses, typesetting, layouts, proofreading corrections, final layouts, indexing, and so forth — my book has finally been officially released in the UK. 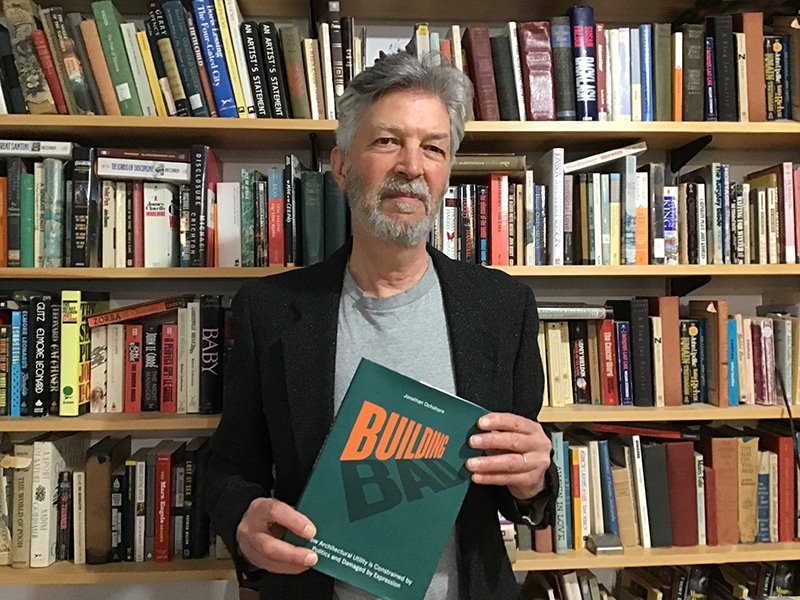 I display my advanced copy of Building Bad

The official release date in the U.S. is Oct. 1, 2021, but the book can be purchased from the publisher’s UK website and mailed anywhere right now! Use offer code BUILDINGBAD20 at the checkout to apply a 20% discount (and, if mailed to an address in the UK, take advantage of free postage as well). Special offer is valid until Sept. 30, 2021.

July 14, 2021, update: You can also purchase a Kindle e-book version on Amazon, and read the first three chapters for free!

Find more information about the book on my website.

As I have been alternating new (original) songs and covers, it’s time for me to re-imagine this hit (recorded in 1980 but released as a single in 1981) from Daryl Hall and John Oates, with Sara Allen also given song-writing credit. I can’t possibly replicate Daryl Hall’s energetic vocal or mimic the particular rock genre — characterized later as “yacht rock.” The tempo of my version is somewhat faster, but with the snare drum slowed down into a half-time feel and a decidedly more bluesy articulation.

I wrote this song in January and February of 2021, then worked on the piano/vocal arrangement for another month or so, recording it live on March 21, 2021 (while simultaneously shooting the video using my iPod Touch mounted on a tripod perched precariously with one leg on the piano and the other two legs straddling my computer keyboard. This is a love song of sorts with my own intuited jazz-inflected chord changes. Try out a 14-bar verse yourself: | Cmaj7 | Eb | Dm | C# | E | Emaj7 | Dm – G | repeat. Or perhaps you would prefer to try the 9-bar chorus: | Cmaj7 | Fm – C# | B | Bb | Ebm – B | Amaj7 | Ab | C# | Fm | Dm – G |. And sorry for mixing up flats and sharps: it’s how I understand the changes, even if it doesn’t correspond to proper musical notation.

Find links to all my music here.