Walking across Cornell’s campus the other day, I was struck by the similarity between Uris Hall, designed by Gordon Bunshaft (Skidmore, Owings & Merrill) in the 1970s, and Milstein Hall, designed by Rem Koolhaas (Office for Metropolitan Architecture – OMA) in the 2000s. 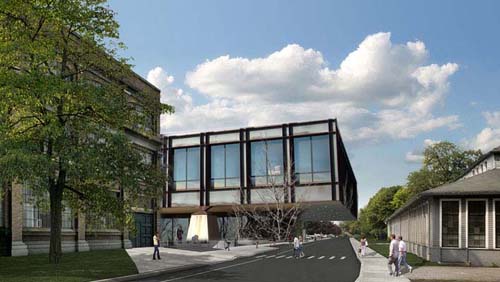 Facade of Uris Hall (S.O.M.) applied to the rendering of Milstein Hall (O.M.A.).

Both buildings consist of  large, essentially square, floor plates supported by rigid frames (vierendeel trusses) lifted off the ground and cantilevered in dramatic fashion from their points of support. Both buildings also hover over large, below-grade, auditoriums: in the case of Uris Hall, the auditorium sits politely under the podium; in Milstein Hall, the auditorium rides a reinforced concrete dome that seems to burst through the ground plane. Both buildings mediate their cantilevered steel superstructures and highly-articulated bases with a glass wrapper designed to enclose space and provide an entry at grade without compromising the visual articulation of superstructure and base. 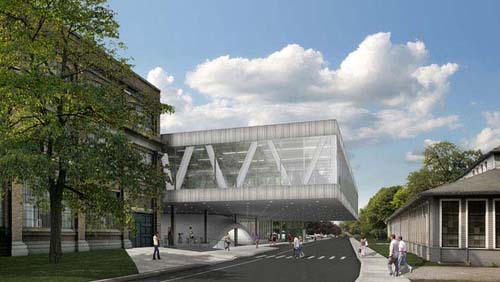