Last September, 2011, I requested a meeting with Mike Niechwiadowicz, Deputy Building Commissioner for the City of Ithaca, to discuss, among other things, the inadequate fire barrier between Milstein Hall (designed by Rem Koolhaas and OMA) and Sibley Hall at Cornell University. This fire barrier, already providing less fire protection than what would normally be required, was itself incorrectly specified when a building permit was requested in 2006, under the old NY State Building Code that was about to expire.

Changes were made after the permit was issued, so that the fire barrier was extended from the second floor — where it was originally called for — to the basement and first floor of Sibley Hall. This fire barrier consisted of the existing masonry wall of Sibley, plus fixed panels of 3/4 hour fire-resistance rated glazing or fire-rated glass doors installed in all the window openings that faced Milstein Hall.

Unfortunately, as I pointed out to Cornell’s Project Director for Milstein Hall as well as Deputy Building Commissioner Niechwiadowicz on September 9, 2011, the fire barrier still was noncompliant, as it contained too great a width of openings in the masonry wall, even with their fixed panels of rated glass.

On October 21, 2011, I met with Cornell Project Director Gary Wilhelm, at the suggestion of Mike N., who then sent me his proposed “solution” to the fire barrier problem: to install special sprinklers on enough of the offending glass panels that the maximum width limit would not be exceeded. This special system developed by Tyco Fire Products essentially allows the window openings to count as fire-resistance rated walls. I examined the specifications for this product and found that they were inappropriate for the intended application, because they cannot be used where the rated glazing has any horizontal mullions — and the glazing installed in the Milstein fire barrier has horizontal mullions. 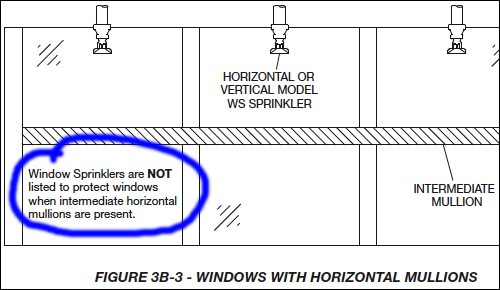 So, I relayed this information to all concerned on October 21, 2011, and didn’t hear anything else about the system until it was actually installed just a few weeks ago.

Well, perhaps I was mistaken about the appropriateness of such sprinklers in this application. Today, I called Tyco and spoke to a technical representative. Not only did he confirm that the system cannot be used where horizontal mullions are present, but he said that the application that I described was completely useless because one half of the sprinklers were sandwiched between the fire-rated glazing and the existing windows of Sibley Hall. Since the sprinklers, to be effective, must be in contact with the heat of the fire, placing a barrier like an ordinary window between a potential fire and the sprinklers renders them nonfunctional and therefore noncompliant. 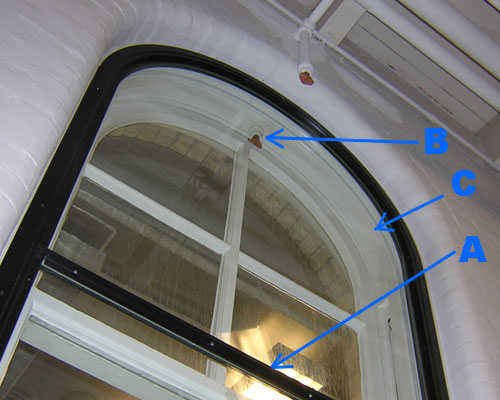