I’ve previously posted a link to my Milstein Hall fire safety critique. I had originally filed a complaint about Milstein Hall’s numerous building code problems with the City of Ithaca Building Department on Dec. 13, 2011. After receiving an unsatisfactory reply, I filed a formal complaint with the New York State Division of Code Enforcement and Administration (DCEA) on April 10, 2012. Even after following up with numerous phone and email queries, I still haven’t received a response from DCEA.

This is particularly troubling because my complaint describes some serious fire safety violations in Milstein Hall, which remain unresolved. I recently was able to read the Building Code analysis in the front section of Milstein Hall’s working drawings. There were several errors or omissions in this analysis, the most incredible of which was the way in which Milstein Hall was implicitly described as an isolated building with no connection to either Sibley or Rand Halls. In fact, Milstein Hall is an addition to Sibley and Rand Halls, being physically and functionally connected to both of these existing buildings. Pretending that Milstein Hall is a stand-alone structure, the Code analysis claimed that its construction type is II-B (for a steel structure with generally unrated assemblies), rather than V-B (for an unrated wood-framed structure, as would be the case if connected to Sibley Hall without proper fire separation).

The other item that caught my attention was the way in which the large crit room under the concrete dome in Milstein Hall was categorized as a “business” occupancy with 100 square feet assigned to each occupant. I’ve updated my Milstein Hall critique to respond to this egregious claim. The photo below, provided by Cornell in a news item with the headline “AAP buzzes as hundreds of alumni, students, and faculty gather during Celebrate Milstein Hall,” shows clearly the actual nature of this “business” occupancy. 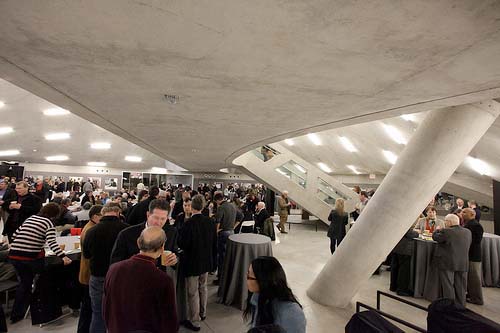 Milstein Hall's architects claim an occupancy limit of 49 for this alleged "business" space.

One thought on “More on Milstein Hall fire safety”