My formal Code Appeal regarding fire-safety violations in Rem Koolhaas/OMA’s Milstein Hall at Cornell University was heard by the Capital Region-Syracuse Board of Review on July 18, 2013. I have placed extensive documentation concerning that appeal and the Board’s findings online.

I emailed the administrative representative of the Hearing Board previously to ask about reopening the case, but did not receive any reply.

Therefore, I sent the following email:

I haven’t received a response to my question to you (see August 6, 2013 email copied below) as to whether I need to make a more formal request for the Board to reopen case number 2013-0250 and reconsider Exhibits 1, 3, 5, and 7, or whether my prior email is sufficient.

Cornell has already violated the findings of the Board concerning Exhibit 1, by placing an occupancy sign in the Crit Room space for 49 persons (see attached photo). As you know, the Board sustained my claim based on Exhibit 1 that a single exit was noncompliant, and wherein I indicated the possible remedies as follows:

“There are only two remedies for this situation. If one exit is to be maintained, then the floor area of the space must be reduced so that the calculated occupancy, including the occupancy of any accessory spaces that egress through the crit room space, does not exceed 50 [note that the 2010 Code has a maximum occupancy limit of 49; the 2002 Code has a limit of 50]. An alternative remedy would be to add additional, remote, exits from the space, corresponding to the calculated occupancy.

“A third approach—posting a maximum occupancy sign limiting the occupancy to 50 people—is not supported by the Code. While this strategy can be used in existing buildings found to exceed current Code limits (see, for example, Exhibit 7), it is not appropriate for new construction. In new buildings, the number of exits is determined by Section 1003.2.2 (2002 New York State Building Code, Design occupant load), which states: “In determining means of egress requirements, the number of occupants for whom means of egress facilities shall be provided shall be established by the largest number computed  in accordance with Sections 1003.2.2.1 through 1003.2.2.3.” The three occupant load numbers, of which the largest value must be used, are based on 1) actual number of occupants; 2) number per Table 1003.2.2.2 (which contains the various “assembly without fixed seats” values quoted above); and 3) the number by combination (which includes any additional occupants egressing through the space from accessory spaces). Since the values established by Table 1003.2.2.2 are larger than 50, a posted maximum occupant load of 50 cannot be used for this space.”

Cornell has used the “third approach” that is expressly forbidden in Exhibit 1 (and that is expressly forbidden by the 2002 NYS Building Code) by posting an occupancy sign that does not even come close to representing the maximum calculated occupant load for the space. I have already indicated in a prior email (also dated August 6, 2013 and copied below) why it is impermissible to assume a “business” occupant load of 100 square feet per person in a room whose actual use is for exhibition, or classroom, or assembly. This remains a room with close to 5,000 square feet of area and only a single compliant exit. 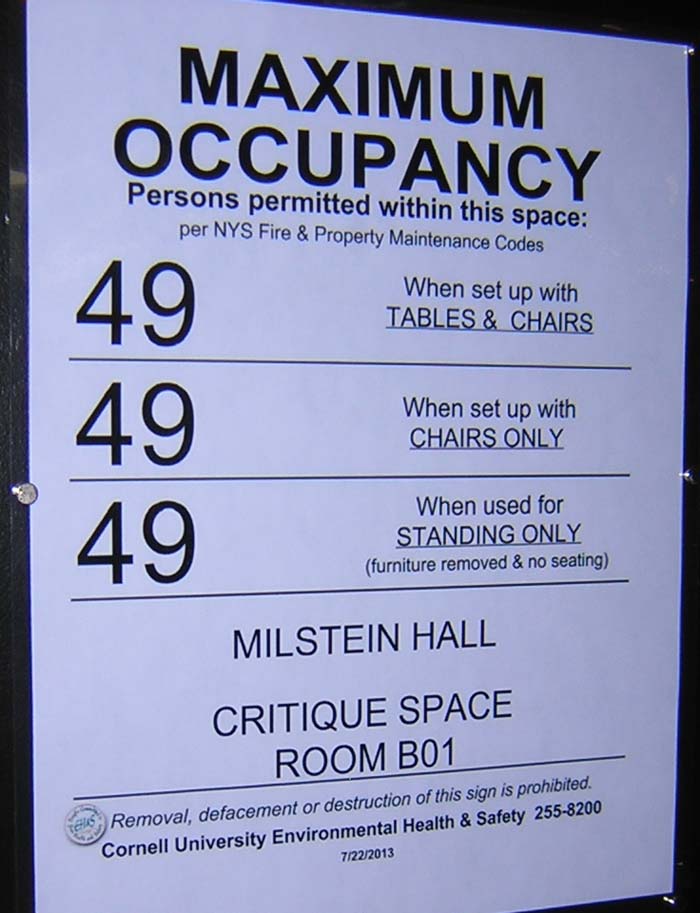 The occupancy sign shown in the attached photo is dated 7/22/2013 — that is, it was posted in Milstein Hall's Crit Room just four days after the Board reviewed my appeal and sustained Exhibit 1.

The next day, I received this message from Charles Bliss:

I have submitted your request. The board will consider it.