I wrote this song after thinking about the advances in technology that have occurred since I was a kid, and how — or whether — these changes made a big difference in the quality of my life. Certainly, some things have become easier (like typing using an editable word processor instead of a manual typewriter) and some things have become newly possible (like distributing this blog post to the entire English-speaking world), but I concluded that, in the final analysis, not much has qualitatively changed. Things have gotten faster, but they’re largely the same old things.

Moore’s Law holds that processing power doubles every two years, while Marx wrote that technology (“machinery”), while mastering the forces of nature, makes man the slave of those forces when in the hands of capital.

So in this song, higher resolution (Moore’s Law) is contrasted with the reality of technological advances under capitalism. The advances are real and significant, as is the damage they inflict on both human and natural “factors” of production.

I use the term “freedom” in this song to describe a fundamental condition of capitalism — that one is free to use one’s own property and to exclude others from it — a condition enforced by state power. Instead of getting seduced by the speed and resolution of technological toys, and by the freedom to buy them and to use them (this is the “siren’s song” I sing about in the chorus), I note that the rich are still getting richer and the poor are still staying poor — that the more things change, the more they stay the same.

You can see my YouTube video (embedded below), or listen to Higher Resolution at a somewhat higher resolution on SoundCloud.

Just a few more notes on the recording and video production:

I recorded the song using Logic Pro 9, playing the “electric piano” live on my midi keyboard. I added bass and drums, and just a bit of organ (also played live on the midi keyboard). Thanks to Kurt for help on the mix.

I shot the video myself, placing my low-resolution Flip camcorder on a tripod, or — for the close-ups — holding it in my outstretched hand. The Red5 Audio RV8 mic with the shockmount that I appear to be singing into is, alas, just an image layered above the video track, courtesy of Photoshop. The photo album I’m looking at at the start of the video is really my old album, with many of my b+w prints, shot with Kodak Verichrome Pan 127 film using a Kodak Hawkeye Flash Fun Camera that I purchased in the early 1960s for $4 with a coupon from the back of a box of Nestlé’s Quik chocolate powder. 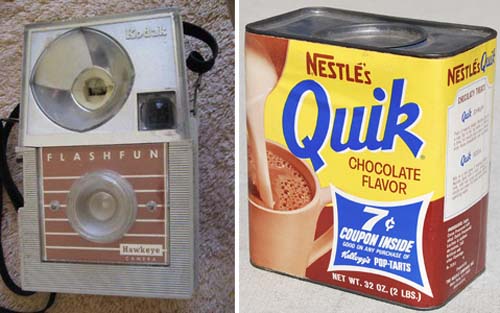 Kodak Hawkeye Flash Fun Camera purchased in the early 1960s for $4 with a coupon from the back of a box of Nestlé’s Quik chocolate powder.

The image of “New York Children,” asleep in the areaway of a tenement building, is from Jacob Riis’s How the Other half Lives, taken in 1888. Several video clips are captured (fair use) from the internet: Gloria Borger and Wolf Blitzer of CNN are our “talking heads on high-def screens,” debating the tea party’s impact on US public opinion; Trump and Romney pledge their mutual support in a February, 2012 Las Vegas press conference; and Microsoft CEO Steve Ballmer “goes crazy” in one of many such viral moments.

The entire video was shot after the audio recording was already complete (lip-synched), with one exception: since I wanted to capture the improvised and spontaneous piano instrumental solo and couldn’t adequately duplicate it after the fact, I re-recorded the solo while filming it “live.”

verse 1. i used to take these photographs – twelve small prints per roll
every one felt special to me just like they were made of gold
no one uses film these days – images are cheap
i threw out my old camera – just  one less piece of junk to keep

verse 2. everyone can read the signs  – nothing is dependable
leaps in productivity just make us more expendable
while talking heads on hi-def screens check out all their tv dimples
primped with cargo blu-ray powder for their pores and pimples  [chorus]

[bridge] sycophants cry “human nature” when we fight against each other
as if, forced to act that way, we really could refuse
this is what your freedom’s good for: to compete against your brother
with every social interaction just a game of win or lose

verse 3. billions struggle to survive while the rich revel in their vanity
businessmen compete within this organized insanity
there is no new paradigm – not even a change in mood
no revolution no revelation – everyone’s still getting screwed  [chorus]

One thought on “Higher Resolution”