It’s been a record-breaking cold February here in Ithaca, and icicles seem to be appearing at the eaves of many campus buildings, including Goldwin Smith Hall. This is of interest because the building just received a new slate roof as part of a major construction project that includes the addition of Klarman Hall. One wonders if this situation will be remedied by the installation of roof insulation, or whether it represents a willful neglect of energy conservation in the interests of expediency. I guess we’ll know next winter, after Klarman Hall is completed. 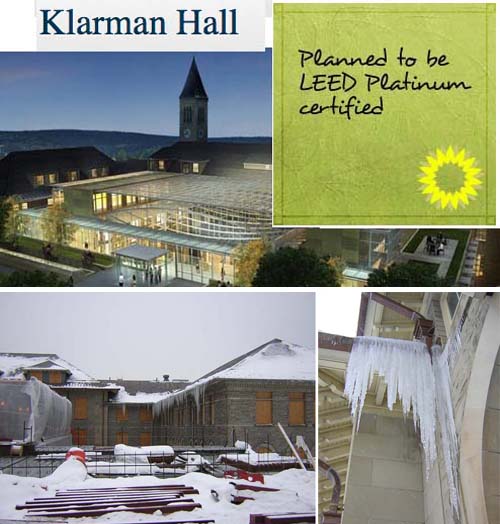 Aside from the energy concern, one also wonders what happens when such icicles (assuming that their existence is not threatened by some serious attention to energy conservation measures in the old building) fall on the skylights of Klarman Hall. Modern glazing is specified so as not to shatter or crack under such impact loads, but it still could be a tad disconcerting for those enjoying the heated spaces below when these large shards of ice crash onto the skylights. The plan below shows that the line of the eaves of Goldwin Smith Hall extends over the skylit spaces of Klarman Hall. 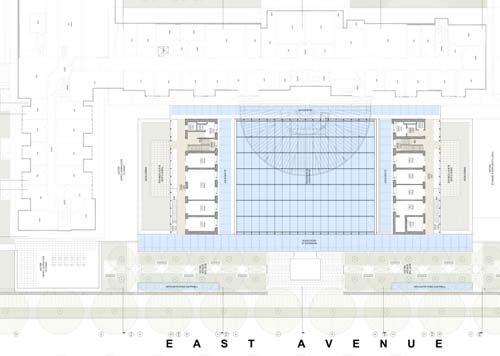 Plan of Klarman Hall (https://as.cornell.edu/klarman-hall/) showing that the eaves of Goldwin Smith Hall  (with icicles) extend over the glazing of Klarman Hall

It’s always interesting to see how Cornell presents its sustainable buildings to the public, in this case advertising Klarman Hall’s “cutting-edge environmental technologies” (accessed 2/27/15). These technologies include the following:

“Occupancy and daylight sensors to reduce the demand for electric lighting.” This is a proven technology that should result in some energy savings, but has nothing to do with the architectural design. In other words, it is always possible to make an energy-inefficient design less energy-inefficient by using advanced technological systems, but such a strategy allows architects to continue behaving badly (“Basically, the current green and sustainability craze can be summed up as architects and engineers behaving badly.”). Also, a word of caution about daylighting assumptions: “…it is common to assume that if the target illuminance is met 80 percent of the time over 50 percent of the floor area, then the electric lights will not be used over this floor area. This is assumed to be a nearly 50 percent saving in lighting energy use. The reality of many offices is that they have blinds for times when the light from outside is too bright, and these are not adjusted because it is easier to switch on and off the lights. It is also common to find that the lights are on when the daylight is well above the target level.” (Michael Donn, “BIM and the Predesign Process: Modeling the Unknown,” Karen Kensek and Douglas Noble, eds., Building Information Modeling: BIM in Current and Future Practice, Wiley, 2014, p.152)

“Extensive green roof systems on top of the office blocks to reduce heating and cooling needs.” Green roofs do not reduce heating and cooling needs, unless one ignores the (cheaper) alternative of using insulation to replace the engineered soil media characteristic of such roofs. In fact, conventional rigid insulation works much better than “green roof” material to reduce heating and cooling loads. It should also be noted that an extensive green roof is more or less equivalent to painting the roof green: sedums will be planted in less than 3 inches of an engineered “soil” medium (that looks more like gravel than actual soil); this is just decoration rather than a serious effort to reduce storm water flows during major rain events or to increase bio-diversity on campus. To accomplish such things, a so-called intensive green roof — heavier and deeper than the one being built — would be necessary.

“High performance glazing and optimized shading over the atrium to reduce solar heat gain.” This is quite brilliant: first create an energy-inefficient and uncomfortable glass box, and then buy really expensive glazing and shading devices so that it is not quite as as energy-inefficient and uncomfortable as it would have been otherwise. Such is the state of sustainable design at Cornell.

“Light wells to allow daylight to penetrate the office block interior.” Possibly a good idea and possibly not. Would modern LED lighting for the offices use more or less energy than what is lost 24/7 by the thermally-inefficient glazing that brings in the light? Only a number-crunching exercise reveals whether this actually is a useful idea.

“A heat recovery unit to recapture heat energy from the return air system in the offices.” Seems like a good idea, but has nothing to do with the architectural design.

“A radiant floor system in the atrium to provide heat.” And how much heat is required during our long Ithaca winters when so much of the the enclosure system consists of thermally-inefficient glazing? Is this really supposed to represent a sustainable (energy-efficient) strategy?

“Variable air volume (VAV) technology to provide energy efficient ventilation.” Fine. Compared to fixed volume systems, VAV systems are more energy-efficient. Still, this says nothing about the underlying strategy of building a glass box that not only receives overhead and southern sun in the summer (requiring considerable mediation by HVAC systems) but also exposes a considerable surface area of glazing to the cold winter weather.

“Chilled water from the campus’ lake source cooling system to reduce cooling requirements.” No, this doesn’t reduce cooling requirements, but rather makes the required cooling less expensive by using cold water from Cayuga Lake instead of using electricity to run chillers. Cornell gets lots of LEED points for all of its “sustainable” building projects by using chilled water from its lake source cooling facility. This, of course, has nothing to do with the architectural design of the building, and raises other questions about the environmental impact on Cayuga Lake.

“Chilled beams to provide energy efficient heating and cooling to the offices.” OK. Good idea. But again, this has nothing to do with the architectural design of the building.