Links to all my writings and blog posts about Cornell’s proposed Fine Arts Library can be found here.

The 2003 and 2007 versions of the New York State Building Codes—the first that were based on the International Building Code (IBC)—state in Section 505.1 that: “A mezzanine… shall be considered a portion of the floor below.” This is important because the exception allowing two-story vertical openings (in Section 707.2 of the 2010 NY State Code or Section 712.1.9 of the 2015 NY State Code, for example) specifically allows such openings to connect two stories, but only as long as they also are separated from other floor openings. Because mezzanines were previously defined as being part of the floor below, they were not considered as separate floors, and therefore didn’t count as additional floor openings under the terms of this exception. In other words, the four interconnected floors in the Fine Arts Library proposal might have been acceptable under these older Codes (assuming that all other requirements governing maximum mezzanine size were satisfied). However, in all subsequent versions of the New York State Building Code, including those from 2010 through 2015, a single word in Section 505.1 (or 505.2 in later versions) was changed, so that a mezzanine is now considered a portion—not of the floor below—but of the story below.

With this seemingly innocent change—from floor to story—the exception in Section 707.2 of the 2010 Code (or Section 712.1.9 of the 2015 Code) allowing floor openings connecting no more than two stories as long as they are also separated from other floor openings now has a very different meaning. With mezzanine floors no longer included as part of the floor below, but still considered as independent floors, the requirement that any vertical opening linking two stories be separated from any other floors is no longer satisfied if mezzanines are present. It is no longer possible to ignore the mezzanine floor levels by claiming that they are part of the floors below them. 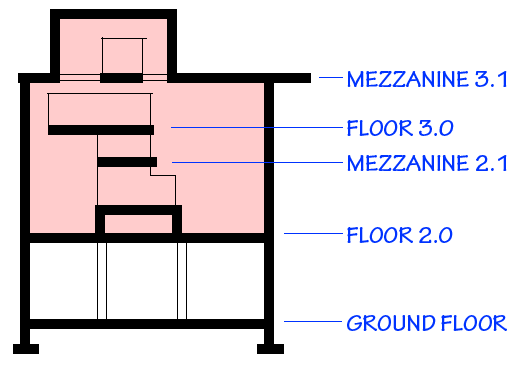 Schematic section through the Fine Arts Library in Rand Hall showing the two “stories” and two mezzanine floors proposed in both the schematic design and 50% design development drawings — with the noncompliant “vertical opening” shown in pink (diagram by J. Ochshorn)