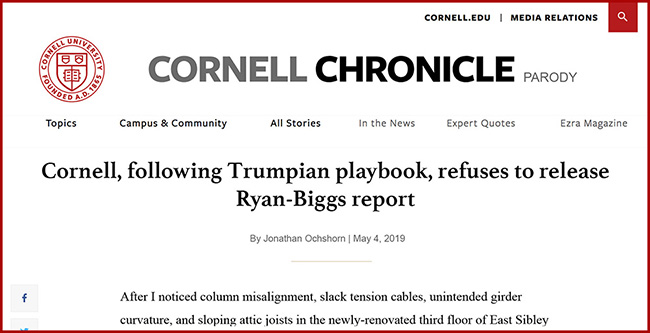 After I noticed column misalignment, slack tension cables, unintended girder curvature, and sloping attic joists in the newly-renovated Frances Shloss Studios on the third floor of East Sibley Hall, I requested information from Cornell about its structural design and, on March 21, 2018, was provided with a structural conditions assessment that had been prepared by Ryan-Biggs Associates in 2009, as well as four pages of structural plans prepared by Robert Silman Associates in March 2015.

On April 2, 2018, based on my examination of these documents, I sent a detailed, though speculative, critique of the structural design to various interested parties, including the director of facilities for Cornell, the director of facilities for the College, and the Director of Code Enforcement for the City of Ithaca. My critique suggested that the consulting engineer’s structural analysis was flawed, not only misrepresenting the behavior of the existing structure but detailing new structural elements that might well have triggered or worsened structural misalignments in the nineteenth-century building. The next day, Ithaca’s Director of Code Enforcement sent me the following note: “Thank you very much for copying me on your email, as of yesterday I am following up on it. Based on your excellent detailed analysis and photos documenting the conditions, I share your concern.”

Cornell—rather than heeding my advice to engage the services of an independent consulting engineer who was not involved in producing the Assessment report or the structural drawings for the E. Sibley renovation—hired Ryan-Biggs Associates to assess the conditions in East Sibley Hall, the same firm that did the initial conditions assessment in 2009. It took over a year for this process to come to a conclusion and, having finally received the report from Ryan-Biggs, Cornell is now refusing to release it. I received the following explanation from the College’s facility director on May 3, 2019: “Hi Jonathan, The report was paid for and is the property of Facilities & Campus Services. It isn’t a public document that I can share. However, I can share that the final results showed that the East Sibley structure is sound and there is no need for additional reinforcement at this time.”

Hence, the Cornell Chronicle parody headline above (Figure 1). I have not been told what top-secret or otherwise sensitive information is in the report that precludes its release. The original structural engineer for the third-floor renovation, Robert Silman—who died in 2018—is a well-respected Cornell alumnus who, as explained here, was influential in directing some of architect Edgar Tafel’s estate to Cornell as a gift. Is there something in the Ryan-Biggs report that might implicate Silman’s firm in a negative or embarrassing way? Is the condition of East Sibley Hall “sound” because of their structural design, or in spite of their structural design? How did the latest Ryan-Biggs report model current structural conditions (i.e., as conventional roof rafters creating an outward thrust or as a collection of unstable mechanisms tending to rotate inward)? Was a dynamic analysis used to assess the response of this highly unusual structure to wind and earthquake forces? How were nineteenth-century clamps—intended to connect girders to the columns for gravity loads only—assessed in terms of their capacity to resist dynamic tension forces induced by winter blizzards or seismic events (Figure 2)? Were members of Cornell’s facilities staff embarrassed by their role as facilitators of this flawed design project? Or did the report conclude that all structural design assumptions for the third-floor renovation were valid, that the supervision and execution of the project was properly done, and that, therefore, all of my concerns were unfounded? None of these questions can be answered unless Cornell releases the report. The City of Ithaca Building Division should require Cornell to submit the report as evidence that the structural renovation meets standards outlined in the New York State Building Code (thereby making the report public), but the Building Department has shown little interest in holding Cornell accountable when it comes to Code compliance.

Finally, the misalignment of the third-floor East Sibley columns—whether caused by or just exacerbated by the Shloss Studio renovations; and whether presenting an imminent threat to safety or not—should be corrected. 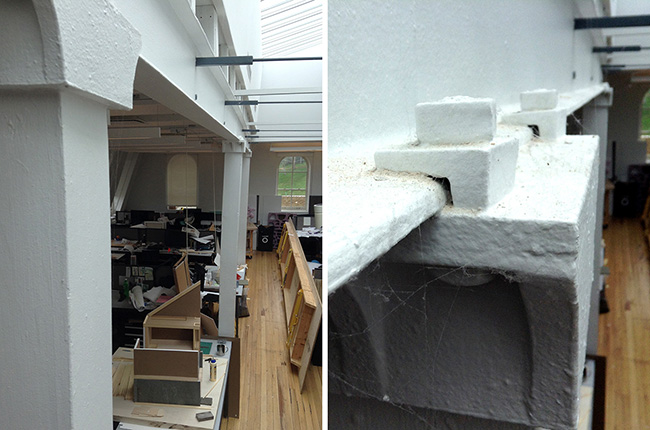 Figure 2. The left image shows column misalignment on the third floor of East Sibley Hall, with tension cables effectively pulling the columns further out of vertical alignment; the right image shows a nineteenth-century clamp connecting girders to columns, a fastener never intended to resist tension forces induced by the columns pushing laterally on the girders (photos by J. Ochshorn, May 4, 2019)

On a related note, Cornell’s College of Architecture, Art, and Planning (AAP) has also refused to include news about my Title-19 code complaint—which outlines numerous life- and fire-safety violations in the Rand Hall Mui Ho Fine Arts Library—in its “News & Events” postings, or any of its other social media venues. Demonstrating contempt for academic freedom by engaging in egregious “viewpoint discrimination,” Cornell AAP has chosen to censor my critique of life- and fire-safety violations, not because it isn’t newsworthy or of interest to its target audience, but because Cornell administrators oppose its point of view and, apparently, fear an open and vigorous debate about these important issues.