Cornell claims to be following “the science” in its response to the coronavirus pandemic. Upon closer examination, the science turns out to consist of studying and comparing two scenarios: allowing students back on campus (where those that return will be tested, isolated, and contact-traced as needed) vs. holding all classes online. I’m not interested in scrutinizing the models used by operations research specialists at Cornell who concluded that holding in-person classes is the safer scenario. Cornell already admits that there are great uncertainties in these modeled outcomes and that, in any case, they expect a certain amount of infections and disease. What is most troubling about Cornell’s approach is not the “science” embedded in their modeling, but rather the self-serving manner in which they frame the problem in the first place. 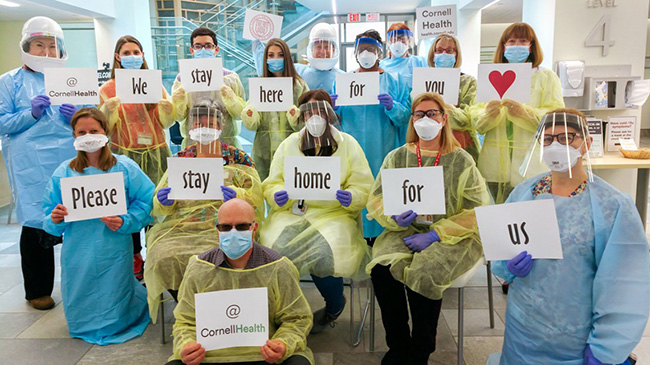 Cornell health workers: “We stay here for you; please stay home for us.”

Confronted with a global pandemic which can best be contained and eradicated through international agreements to coordinate lockdowns, testing, contact tracing, isolation, treatment, research, and travel, Cornell instead takes the fragmented, inept, and inadequate U.S. response to the pandemic as its unexamined starting point, and never bothers to consider alternatives, or ask questions, that might point to a more effective, coordinated, and cooperative global solution.

Of course, Cornell cannot single-handedly organize a cooperative and coordinated international effort to eradicate this virus; to do so would entail abolishing or suspending the rules and ideologies governing international capitalism. Rather, Cornell is a part of the infrastructural basis that supports the capitalistic organization of human society, so that even the suggestion that it might contribute to a viable solution to this pandemic—one that challenges capital itself—is purely rhetorical. In fact, Cornell’s attitude and behavior with respect to the pandemic is remarkably similar to its attitude toward that other well-known crisis: global warming. In both cases, Cornell abstracts from the global nature of the problem, and instead looks primarily at what it can do for itself. Of course, there are researchers at Cornell who address the negative impacts of global warming on third world and impoverished populations, but such research inevitably works within the framework of global capitalism, as it must in order to attract funding.

In the case of global warming, Cornell buys into the discredited LEED rating system, damages Cayuga Lake in order to cool its own buildings while using less fossil fuel, and threatens the seismic stability of the region with its plans to essentially “hydrofrack” earth-source energy to directly heat its campus buildings. Cornell has petitioned the Public Service Commission to get more money back for its solar power and, more recently, petitioned the New York Supreme Court to overturn a tax ruling that considered its solar farm an “improvement” to the land rather than as merely personal business property. Cornell’s motivation in all such “sustainable” practices is, naturally, to compete for eco-sensitive students, faculty, and donors, but it only acts when doing so is consistent with its financial goals: each sustainable intervention needs to “pay off” or it won’t be implemented. Yet while Cornell churns out its public relations news articles and tweets, the amount of global warming gases in the atmosphere continues to rise and the planet continues to spiral into an ecological catastrophe for many of its species, including the human one.

In the case of the pandemic, Cornell similarly looks primarily at its own campus, not bothering to examine and critique the systemic and ideological basis for the inept international response. Even countries, like China, that take necessary, effective, and appropriate (or, to use the preferred adjective of liberal media like the NY Times, “draconian”) measures to eradicate the virus are still at the mercy of a competitive and uncoordinated global response that—because of the international movement of goods and people—compromises their own best efforts.

The ideological content of freedom—most often characterized as a “culture war” pitting individual liberty against governmental mandates to wear masks and maintain social distancing—is especially potent in the U.S. and goes a long way to explain why the U.S. response to the coronavirus is less effective than the response of most other capitalist nations. But the problem is not simply ideological: the reality of capitalist freedom also undermines human wellbeing. Of course, freedom has many meanings, but the most relevant here involves its relationship with property: freedom, in this context, is the opportunity—more accurately, the compulsion—to use one’s property as one wishes to advance one’s individual desires, as long as doing so does not infringe on the property rights of others. That this freedom benefits those with lots of property—that it supports and perpetuates a class society and forces those without property to sell their own labor power for some degree of subsistence—can only be disputed by charlatans and corporate sycophants.

Such freedom to use one’s property, whether to accumulate wealth or merely survive, is the sine qua non of capitalism. So what could possibly go wrong in a society where wealth, and thus the very conditions for existence, are not only privately owned but owned to a great extent by a tiny fraction of the planet’s population? For one thing, corporate and national decisions end up being made with an eye on profit: disease and death enter into such calculations as mere entries in the corporate ledger. Yet it is also clear that the ideological framing of property (the American dream, and its many variants) can prevent those people damaged by the enforcement of property rights from criticizing property itself.

Both the development of vaccines and the procurement/production of necessary medical equipment are held hostage to the needs of capital, rather than organized cooperatively (i.e., globally). And the focus on vaccine development, rather than on global eradication of the virus, is probably best understood as an open-ended multi-billion-dollar profit opportunity for both well-entrenched drug cartels and high-tech startups for whom eradication of the virus—and the international cooperation this would entail—appears as a threat to their investments. In the U.S., the federal structure consisting of largely independent states, designed to foster competition, unsurprisingly frustrates coordination and cooperation. The same competitive framework frustrates any attempt at international cooperation and coordination. Yet cooperation, rather than competition, is clearly required in order to eradicate a virus that is so easily transmitted through commerce and travel.

So, where does this leave us? Many people have written about the likelihood that the virus will more thoroughly infiltrate both the Cornell and greater Ithaca communities, especially once students arrive in large numbers from outside Tompkins County. No one knows whether the inevitable outbreaks will be controlled (limited to relatively few cases) or turn into “superspreader” events that will wreak havoc on all Cornell’s optimistic plans. No one knows whether people will suffer debilitating illnesses or death as a result. But it is likely that Cornell’s testing and screening protocols will prove inadequate, for several reasons.

First, tests for Covid-19 are simply not that useful at the early stages of infection. Even four days after infection, the rate of false negatives is as high as 40%. Second, some students may be unwilling to truthfully answer screening questions after being exposed, since doing so would place not only themselves, but all their recent contacts, into quarantine or isolation. Third, some students are simply reckless, and will not comply with guidelines for social distancing and mask wearing, especially after drinking (“What?” you respond in amazement, “students drink?”). Fourth, there will be infected people—whether staff, faculty, students, or visitors—who inevitably break through Cornell’s bubble and trigger big or small outbreaks. All this is quite frustrating, not because Cornell is necessarily acting in bad faith, but because our lives are at the mercy of corporations and nations, all competing for survival or supremacy within an unforgiving capitalist framework, and all incapable of cooperating to deal effectively with the pandemic or, for that matter, any other existential global crisis.