[updated below Oct. 13, 2011 and March 9, 2012] Appendix K of the 2002 New York State Building Code made significant changes to the model 2000 International Building Code (IBC) upon which the New York State Code was based. It allowed a building addition to “increase the area of an existing buiding beyond that permitted under the applicable provisions of Chapter 5 of the Building Code for new buildings” as long as a fire barrier was provided.

Normally, a fire wall — not a fire barrier — would be required in such cases, but NYS legislators wanted to make it easier and less expensive (and therefore less safe) to build additions to existing structures. Whereas it is absolutely clear what a fire wall is, and where it must be placed in relation to the parts of a building it is separating, this hastily contrived NYS appendix doesn’t bother to specify exactly where its alternative fire barrier must be provided.

This wouldn’t be much of a problem if the addition were the same height as the existing building. However, Milstein Hall at Cornell University (OMA – Rem Koolhaas architects) is a two-story building addition connected to Sibley Hall, which is a three-story building (see building section below, adapted from Cornell’s Milstein Hall web site). The architects for Milstein initially had called for a fire barrier between the two buildings, but only on the second-floor where they literally connect. It was only later, when this assumption was challenged, that they added fire barrier protection at all levels where the two buildings come into contact (i.e., at the basement and first-floor levels as well) — see update below. Left with no protection at all is the thrid-floor exterior wall of E. Sibley Hall overlooking Milstein’s green roof. 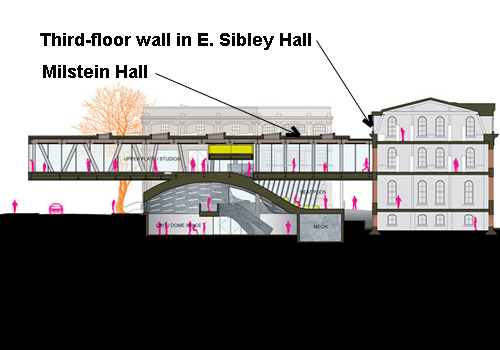 This is a problem for two reasons. First, the window openings on the third floor of Sibley have no fire protection. Second, the wooden load-bearing exterior wall of Sibley’s third floor has no fire-resistance rating. None of this was a problem when Sibley was a non-conforming, grandfathered, free-standing building. It becomes a problem with the construction of Milstein Hall.

The 2002 New York State Code (specifically, Section 704.10), under which Milstein was permitted, requires that “opening protectives” be provided “in every opening that is less than 15 feet (4572 mm) vertically above the roof of an adjoining building or adjacent structure that is within a horizontal fire separation distance of 15 feet (4572 mm) of the wall in which the opening is located.” All of the window openings in the third floor of E. Sibley Hall that overlook Milstein Hall qualify under this section for opening protectives. The only exception to this requirement is where the roof construction below the openings has a 1-hour fire-resistance rating and its structure (i.e., the steel beams and girders supporting the roof) has a 1-hour fire-resistance rating. Milstein’s roof structure has no fire-resistance rating, so the exception does not apply.

The fire separation distance between Sibley and Milstein Halls is 0 feet (they are physically connected), based on the most generous assumption that one can make, i.e., that they are effectively two separate buildings. Actually, Appendix K only allows them to be considered as separate buildings from the standpoint of “area” (K902.2). However, if they were considered as a single building — as would be required under the current building code (i.e., without a fire wall) — then all of this discussion would be moot since Milstein Hall would be clearly noncompliant. Either way one looks at it — as a single building or as two separated buildings — the current situation appears to be noncompliant.

[Update: Oct. 13, 2011] As it turns out, the nonconforming fire barrier placed between Sibley and Milstein Hall — to satisfy the ambiguous requirements of Appendix K from the 2002 Building Code of NYS — is not only nonconforming but also noncompliant. The width of fire-rated openings in such a fire barrier cannot exceed 25 percent of the length of the fire barrier wall. In the image below, the aggregate width of openings is shown graphically in relation to the total length of the fire barrier wall. It can be seen that the opening width greatly exceeds the 25 percent limit: 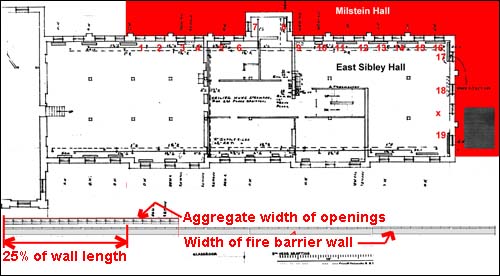 [Update: March 9, 2012] A noncompliant solution to the fire barrier problem was proposed and recently installed. At great expense. And completely useless. See my analysis here.