Milstein Hall at Cornell (Rem Koolhaas, OMA architects) contains what appears to be three floors, all interconnected with an opening through which passes an unenclosed egress stair. Such a condition, unless it is designed as an atrium with special smoke control measures, would not be permitted under the New York State Building Code — see my discussion of holes in floors. 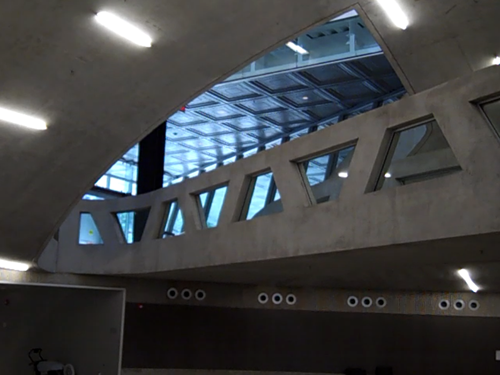 Milstein Hall's interconnected spaces -- crit space below, lobby/bridge in the middle, and studios above -- can be seen in this image

I asked the Project Director for Milstein Hall how such an interconnected opening was possible, since the interconnected spaces were clearly not designed as an atrium. He explained that, contrary to appearances, the building only has two stories with no basement: what appears as the basement is actually the first floor; what appears as the first floor is actually a mezzanine; and only the second floor is really what it appears to be — the second floor. Mezzanines need to be no more than one-third the floor area of the room or space they are in, and the first-floor lobby of Milstein did appear to be no bigger than one-third the floor area of the crit space under the dome to which it is connected.

However, while the interconnected openings in Milstein Hall appear at first glance to meet the “letter” of the Building Code, they may well be noncompliant. 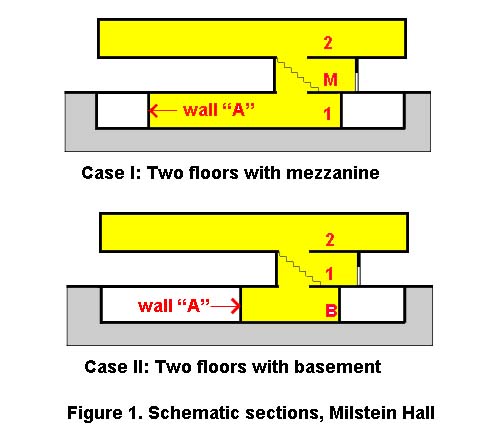 Comparing Case I and Case II in Figure 1, one can see that the entire rationale for allowing an unenclosed egress stair from the second floor to the mezzanine lobby depends on the relative area of the space defined by what I have schematically called wall “A.” If wall “A” is placed in such a way that the area of the space it forms is at least 3 times bigger than that of the lobby (Case I), then the lobby can be counted as a mezzanine, and the egress stair is then technically within an unenclosed opening connecting only two stories, thereby conforming with exception 8 or exception 9 in Section 1005.3.2 of the 2002 New York State Building Code.

However, if wall “A” is moved so that the area of the space it forms is less than 3 times the size of the lobby (case II), then the lobby cannot be called a mezzanine. It now becomes the first floor, and the same openings and egress stair become noncompliant.

This seems entirely irrational, since Case II, with less floor area to house combustible products and a smaller number of occupants than Case I, is nevertheless noncompliant, whereas Case I, with a larger area and therefore more occupants and potentially combustible products, would be deemed compliant.

It seems probable either that the writers of the Code never anticipated that their definition of mezzanine would be exploited in this way, or that other aspects of the mezzanine definition make this geometry noncompliant.

The definition of mezzanine, found in Section 502 of the 2002 Code, states that it must have “a floor area of not more than one-third of the area of the room or space in which the level or levels are located.” The key word here is “in.” The mezzanine must be “in” the room or space, not outside the room or space with an opening that connects them. Now, one might debate what exactly the meaning of the word “in” is (by analogy to Bill Clinton insisting that a proper interpretation of his prior testimony “depends on what the meaning of the word ‘is’ is”). As can be seen in Figure 2, common sense would suggest that the lobby is not “in” the dome. Both the section (Figure 2a) and the composite photo (Figure 2b) show clearly that the concrete structure of the dome creates a distinct “room” or “space” and that the lobby (pictured through the hole in the dome visible at the left of Figure 2b) is completely outside that space. 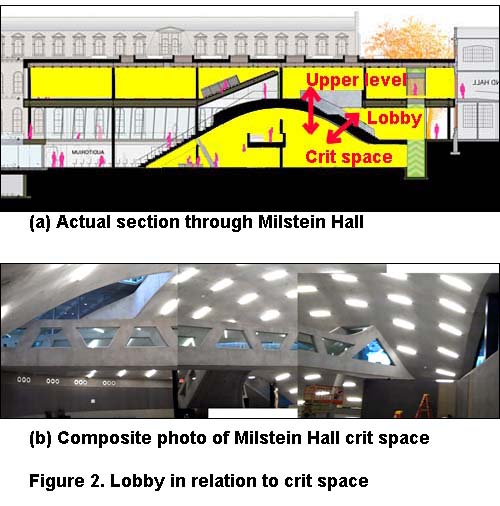 It is possible (along the lines advocated by Clinton) to define “in” topologically rather than by recourse to “common sense”; in that case the lobby can indeed be tested as a mezzanine “within” the dome “crit space.” In other words, we could draw a continuous contour line through the opening connecting the two spaces and call the resultant figure a single space. But the Code is fairly careful about the prepositions it deploys. If the intent were to allow a mezzanine to have any interconnected relationship to a room or space, other words or phrases could have been chosen instead of “in” or “within.” The Code does not describe a mezzanine as being “next to” or “adjacent to” or “connected to” some other room or space: it specifically says that a mezzanine must be “within” a room.

Still, this is admittedly ambiguous. The commentary to the 2009 IBC doesn’t really help: “So as not to contribute significantly to a building’s inherent fire hazard, a mezzanine is restricted to a maximum of one-third of the area of the room with which it shares a common atmosphere.” Here, the phrase “common atmosphere” has two purposes: first, it signals that the mezzanine must be somehow contiguous with the space it is in; second, it excludes any “enclosed portion of a room” in computing “the floor area of the room in which the mezzanine is located.” Having a “common atmosphere” appears therefore to be a necessary, but not sufficient condition. The mezzanine must also be “in” the room or space, which again brings us back to the question of what “in” is.

But this much is true: if the lobby space cannot be called a mezzanine, then it counts as a story. In that case, the interconnected openings are noncompliant, as they meet none of the exceptions for shaft enclosures outlined in Section 707.2 of the 2002 Code. And even if the lobby is now granted the status of mezzanine, the crit space under the dome becomes locked into its current geometry forever: it can never be reconfigured, for example, into a series of smaller rooms, since the lobby would then exceed its maximum floor area qua mezzanine and would revert back to being a separate story. The opening connecting what would now be three interconnected stories would be noncompliant.

[Update: Oct. 13, 2011] As I describe in a later post, the crit space has now been subdivided into a series of smaller rooms, appearing to make both the lobby noncompliant as a mezzanine, and the interconnected stories with an unenclosed egress stair noncompliant according to the various allowable exceptions for shaft enclosures.

2 thoughts on “milstein hall and its interconnected spaces”