When an existing building is renovated under the 2010 Existing Building Code of New York State, and the renovation involves a change to a “higher hazard” occupancy, then the Code requires that “heights and areas of buildings and structures shall comply with the requirements of Chapter 5 of the Building Code of New York State for the new occupancy classification.” Since the replacement of Group B studio/classrooms with a Group A3 Fine Arts Library at Cornell University constitutes such a change to a higher hazard occupancy, placing this library on the third floor of the Rand Hall portion of the combined Sibley-Milstein-Rand Hall complex can only happen if the entire complex satisfies Chapter 5 height and area limits under the current (2010) Code. This is true even if the various original elements of the combined building (i.e., Sibley, Rand, and Milstein Halls considered separately) were all built under older (or were built prior to the implementation of) Codes and even if they satisfied all height and area limits under those older Codes.

As I wrote in 2012, the Fine Arts Library was constructed on the third floor of Rand Hall even though this renovation clearly did not comply with the 2010 Building Code of New York State. I challenged this Code violation before the Capital Region-Syracuse Board of Review on July 18, 2013 and the Board ruled in my favor. Subsequently, Cornell — unwilling to fix the Code violations — applied for a Code variance, which was inexplicably granted. This variance allows Cornell to ignore two fire safety provisions in the Code which otherwise would have made this occupancy unlawful. These Code provisions concern floor area and height limits in the Code (specifically Sections 503.1 and 504.2). Cornell asked permission to increase the allowable floor area of Rand-Milstein-Sibley Hall from about 22,500 square feet to 70,000 square feet in order to permit the library to exceed the second-story limit stipulated in the Code (even though the current library is not on the second floor); Cornell  also asked permission to occupy the third story of the “Rand Hall” portion of the combined building because the Code also does not permit library occupancies in sprinklered, Type V-B buildings on any floor level higher than the second story.

In arguing for this Code variance, Cornell’s paid consultant made reference to two sets of fire barriers that were inserted between Milstein Hall and Rand Hall, and between Milstein Hall and Sibley Hall. These fire barriers were created in order to justify the otherwise noncompliant floor area of the Sibley-Milstein-Hall complex when Milstein Hall was constructed under the 2002 Building Code of New York State, and the consultant claimed that these fire barriers helped make a noncompliant Rand Hall library safe. When I pointed out at the variance hearing that neither of these fire barriers satisfied Code requirements for openings, a member of the Review Board took it upon himself to suggest that a second Code variance be added to the agenda — one not even requested by Cornell — to waive Section 715.1 in Chapter 7 of the Code so that opening protectives (for the windows that penetrate the fire barriers) would no longer be required. This, of course, was completely gratuitous, since once height and area limitations were waived, the Fine Arts Library could be placed anywhere in the building complex irrespective of any fire barrier deficiencies. Moreover, it was never the fire barriers, or lack thereof, that created the Code problem that the variance sought to remedy. Even with perfectly operating fire barriers, the Rand Hall library renovation would have been grossly noncompliant because it would still have violated the height limit (for a third-story library) and the floor area limit (for a second-story library).

That being the case, the Fine Arts Library in its current location on the third floor of Rand Hall — even after the approval of this Code variance — may still be noncompliant. Specifically, the “questionable mezzanine” in the Milstein Hall portion of the combined building violates floor separation requirements in the 2010 Code. While Chapter 5 of the 2002 Building Code of New York State allowed the Milstein Hall mezzanine to be considered as part of the floor below, Chapter 5 of the 2010 Building Code of New York State no longer recognizes that allowance. Instead, the mezzanine floor is considered to be separate from the floor below, even though it remains a portion of the “story” below (floors and stories have different meanings in the Building Code). Milstein Hall therefore has three floors, according to the 2010 Code, instead of only two floors according to the 2002 Code,  while the number of stories (two) hasn’t changed. Because no more than two floors (or two stories) can be interconnected by an opening without a shaft enclosure, the three floors of Milstein Hall are not compliant under the 2010 Code. This fact seems to to preclude any change to a higher hazard occupancy within the combined Sibley-Milstein-Rand complex unless a shaft enclosure is constructed at the Milstein Hall mezzanine such that no more than two floors are interconnected. In other words, because Cornell did not seek a variance for this nonconforming mezzanine, the Fine Arts Library may still be noncompliant. 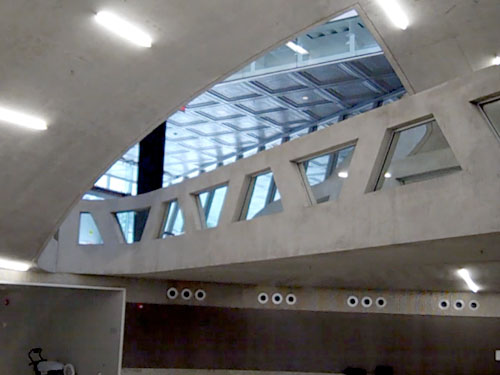 Milstein Hall’s entry-bridge mezzanine, pictured above, is open not only to the floor below, but also to the floor above (photo by J. Ochshorn)

On the other hand, one could argue that the mezzanine — defined and regulated in Chapter 5 of the Code — need only satisfy specific Chapter 5 height and area limits. Since these height and area limits appear to be met, the fact that the mezzanine has become nonconforming as a result of Chapter 7 stipulations may not be relevant, even though these stipulations have become applicable because of changes in the rules governing mezzanines that appear in Chapter 5.

The bottom line is this: the fire safety of Rand and Sibley Halls has become hopelessly compromised by the construction of Milstein Hall — an addition that created an enormous combined building that not only greatly exceeds allowable areas specified in either the 2007 or 2010 Building Code of New York State, but also precludes the placement of new assembly spaces (such as libraries or lecture halls) anywhere in the combined building that is currently occupied by Group B functions (e.g., studio-classrooms or offices). Any new Fine Arts Library placed in the Rand Hall portion of the building complex would be well-advised to include a 3-hour fire wall separating Rand from what would then become a smaller building consisting only of Sibley and Milstein Halls. In this way, Rand Hall would regain its independence and its Type II-B construction status, which would in turn allow assembly spaces on all its floor levels unconstrained by any height or area limitations.

4 thoughts on “Why Cornell’s current Fine Arts Library may (or may not) be noncompliant.”