[Updated and revised Oct. 1, 2016 to correct a minor math error in the calculations]

Much of the impetus for “green” buildings comes from an oft-repeated statistic about all the energy consumed in or by buildings: “In 2014, 41% of total U.S. energy consumption was consumed in residential and commercial buildings” [U.S. Energy Information Administration]. This statistic, which hovers around 40% plus or minus one or two percentage points, shows up in USGBC publications, U.S. government publications, and in hundreds of other sources.

Remarkably, it’s not easy to track down exactly what this alleged energy use consists of; that is, how exactly buildings are consuming so much of the total energy harvested or produced in the U.S. The problem is that the typical breakdown of energy usage doesn’t clearly identify the sources of energy and their applications — for example, energy use may be identified as “residential” or “commercial” but these values may not include electric power, which often has its own separate category. But we can’t easily find out where and how the electric power is used. 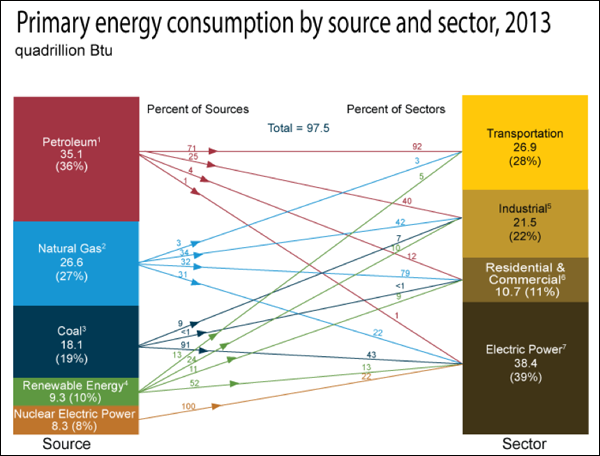 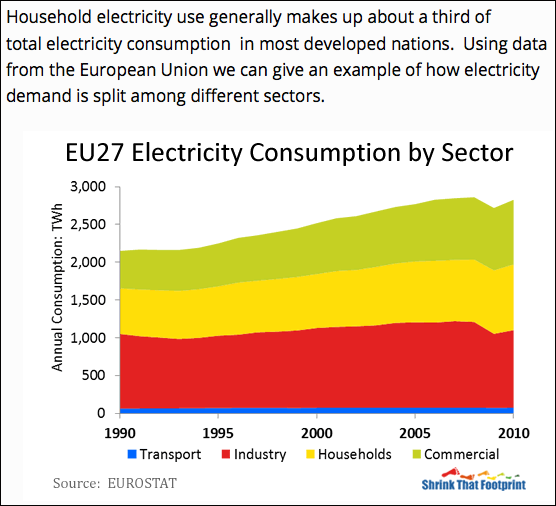 However, not all of this electric energy is used by “the buildings.” From Figure 3, we see that, in the U.S., 44% of this electric use is not really from the “building” itself: 29% of electric use is for entertainment (presumably television, computers, etc.), and another 15% is for things like refrigerators, washing, and cooking. That leaves 56% for the building; so instead of a residential electric usage of 14.43%, the actual “building” usage (cooling, lighting, etc) is more like 0.56 x 14.43 = 8.08% of all energy. 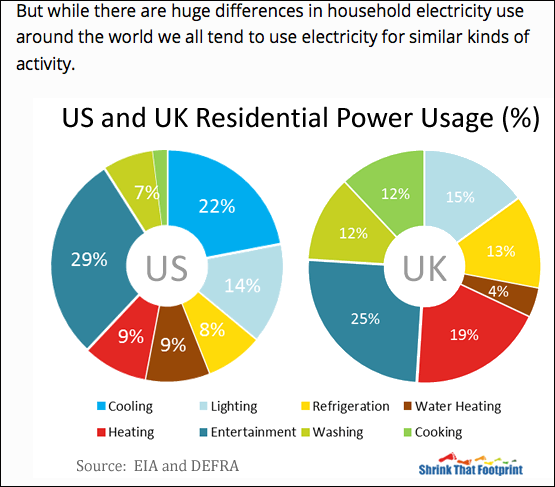 From Figure 4, we can see that commercial (office) buildings use about 20% of their electric usage for “other” things — presumably non-building plug loads — which leaves about 0.80 x 14.43 = 11.54% of all energy consumed in the U.S. for commercial building electric use.

Adding this all together, we can see that “buildings” (residential and commercial) consume 8.08 + 11.54 = 19.6% of all energy in the form of electricity and another 11% of energy other than electricity (mainly natural gas; see Figure 1). The total energy consumed by residential and commercial buildings is therefore about 30% of all energy consumed in the US, rather than the 40% figure so often cited.

Where does the other 70% go? Well, from Figure 1, we see that 28% goes to transportation (cars, trains, buses, planes, etc.) and 22% goes to industrial applications. The balance (about 20%) goes to various “non-building” uses of electricity (see Figure 2) of which about half, or 10%, is assumed to be for industrial/commercial non-plug-load uses and the remaining 10% is for other “non-building” uses (plug loads) within residential or commercial buildings.

In other words, only by adding the 10% plug load electric energy use to the 30% of total energy actually used by residential and commercial buildings do we get a figure close to 40%. But plug loads are not affected by building design measures such as increased thermal insulation, or more efficient mechanical systems, or more attention to passive or sustainable energy strategies. It seems therefore a bit misleading to include them within “building” energy use, since it is not the “building” that is using such energy.