Instead of measuring the actual areas of rooms and spaces, the architects of the Fine Arts Library 100% schematic design proposal have invented a new area category which they call “useful area.” This “useful area” omits what the architects call “circulation area” from the actual net areas of rooms and spaces, so these areas do indeed become quite useful: useful, that is, for fudging the actual numbers so that the mezzanines appear to be compliant.

For example, the net areas of Mezzanine 3.1 and Level 3 are 1,989 and 3,883 square feet respectively, according to data in the architect’s proposal. However, for a floor area of 3,883 square feet, the maximum allowable gross area of the mezzanine would be 3,883/2 = 1,942 square feet. Why use gross area instead of net or “useful” area? Because that’s what the Commentary to the IBC (which is the model Code from which the NYS Building Code is derived) says should be used. But even the net area of this mezzanine would be too big.

By hanging the stack levels above the second floor, two additional problems are created, or only one problem if you believe that creating a four-foot-high dust-collecting space under the entire second-floor stack level — just so the stacks will appear to be hanging from above — is not a problem. What remains a problem is that this geometry creates what the NYS Building Code or the ADA calls a “protruding object” — that is, a surface with a leading edge that is high enough above the floor (more than 27 inches) so that it presents a danger to anyone with a vision disability, even those using canes. The entire second-floor stack level, hovering about four feet above the rest of the second floor, creates one huge protruding object. 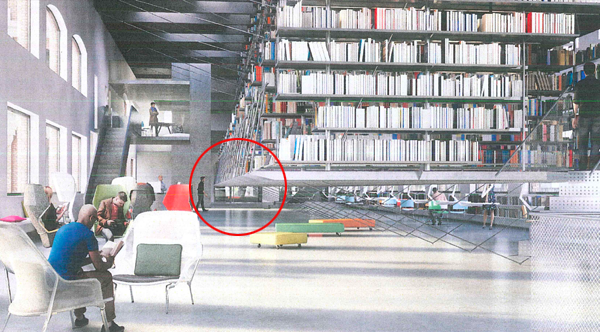 Not only does the entire leading edge of the second floor stack area appear to be a “protruding object,” but the architects appear to have configured these surfaces with a knife-edge geometry (photo screen-captured from a rendering linked from Ithacating in Cornell Heights)