It’s both a bit weird, but also quite expected, to see the same design tropes appearing over and over again within the same time period at the same place. I hinted at this phenomenon in my 2009 song, Prisoner of Art.

Two examples from the Cornell campus follow. The first is based on the idea that, because Cornell is situated between two gorges, the idea of the gorge should somehow be expressed in new campus construction. So not only do we get the West Campus dorms designed by Kieran Timberlake referencing the glacial topography of the Finger Lakes, but also more literal representations of the gorges in Bailey Plaza (Michael Van Valkenburgh Associates: “A tilted, striated bluestone fountain presents a mysterious dark pool at its base, making material reference to Ithaca’s famous gorges”) and the Pew Engineering Quad (EDAW, Inc.: “The created landscape will dramatize the topography by adding landscaped slopes that recall the natural character of the nearby Cascadilla Gorge”). 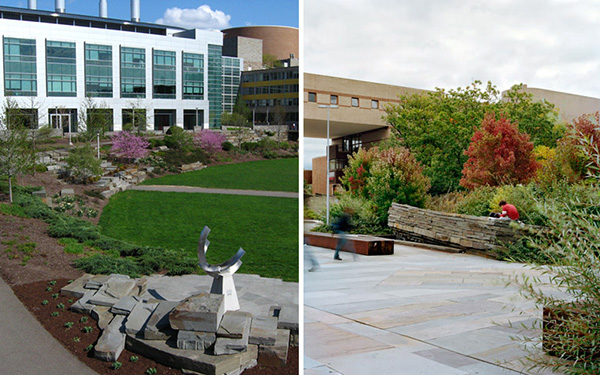 Second, the idea of defamiliarizing the standard turf quadrangle by “tilting” up one corner of a parterre has shown up in at least three recent landscape gestures at Cornell: at the Law School’s new underground addition (Ann Beha Architects with Trowbridge Wolf Michaels Landscape Architects); at the entry plaza in front of Weill Hall (Richard Meier with Olin Landscape Partnership), and in the triangular space bordered by Milstein and Rand Halls (OMA Architects with Scape Landscape Architecture).