Cornell’s Fine Arts Library in Rand Hall, currently under construction, is unsafe and seriously noncompliant. Rather than address fire safety concerns and design a safe library, Cornell has repeatedly gone to the New York State Board of Review to request waivers of building code requirements. Yet in spite of being granted code variances on these several occasions, Cornell’s final proposal—designed by Wolfgang Tschapeller in collaboration with Architect STV—is still deficient with respect to fire safety provisions that were not addressed in these prior variance requests. I had a chance to quickly look through the working drawings for the library that were made available in the Dean’s Office on January 19, 2018  (“Conformed set” dated 12/15/17), and I have outlined several serious fire safety violations below. Of course, it’s possible that I missed some exculpatory material, but I thought it would be important to bring these issues to the attention of Cornell and the Ithaca Building Department in order to determine if any remedial action needs to take place. Given the seriousness of these potential violations, it is my view that all construction work on the project should stop immediately until the plans are reconciled with fire safety provisions in the building code. [Updated Jan, 31, 2018: I’ve just learned that only interior demolition and site preparation have been approved by the City of Ithaca; the project itself is still under plan review and a building permit has not yet been issued.]

1. Noncompliant exit access stairway
The open exit access stairway serving the various library stack levels and roof pavilion (Stair “B” per add-alt. #6, as shown schematically in Figure 1) violates Section 1006.3 of the 2015 New York State Building Code. This code section, which appears for the first time in the 2015 IBC, requires that the “path of egress travel to an exit shall not pass through more than one adjacent story.” Since exit access stairway “B” passes through more than one story before finding an enclosed exit on the second floor, it is in violation of this section. The 2015 IBC “Commentary” confirms this interpretation. 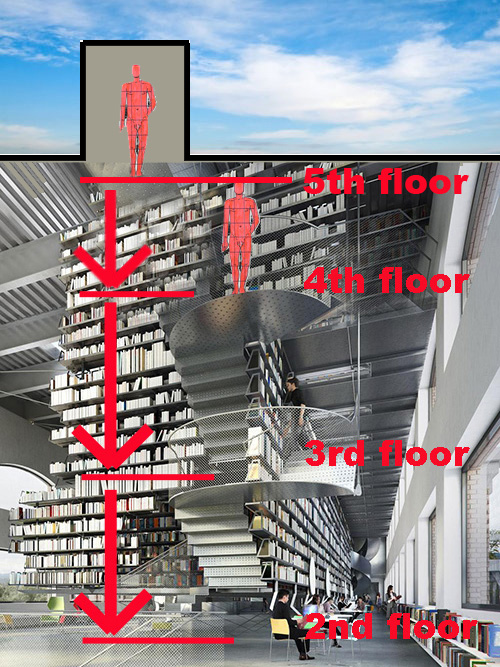 Fig. 1. An early architect’s rendering of proposed exit access stairway “B” in Rand Hall showing that an occupant on the 5th floor (roof pavilion) must pass through two adjacent stories (i.e., the 4th and 3rd floors) in order to find an enclosed exit on the 2nd floor (image crudely edited to replace the extension of this exit access stairway to the “lantern” level, which no longer exists, with a schematic representation of the open bulkhead leading to the roof pavilion at the 5th floor).

Cornell’s code consultant, in Exhibit A of Cornell’s 2016 Variance request, stated incorrectly that such an open exit access stair is allowed by Sections 1019.3, exception 5, and 404.9.3 in the 2015 NYS Building Code because “Chapter 4 continues to contain provisions which supersedes [sic] other provisions in the Code.” Nothing could be further from the truth. The first section that he cites (1019.3, exception 5) requires that exit access stairways be enclosed if they are not in an atrium. It does not say that exit access stairways in atriums can pass through an unlimited number of stories. The second section that he cites (404.9.3) limits exit access travel distance in an atrium to 200 feet, and is not relevant to the question at hand. On the other hand, Section 1006.3, which Cornell’s Code consultant doesn’t mention in his analysis and which he seems to be unaware of, prohibits such stairs when they “pass through more than one adjacent story.” These code requirements are documented in Figure 2. According to my conversation with Technical Code Experts at the International Code Council (the organization that creates the International Building Code from which New York State Codes derive), this latter Section 1006.3 is specific, clear, and unambiguous, and places limits on the application of Section 1019.3. 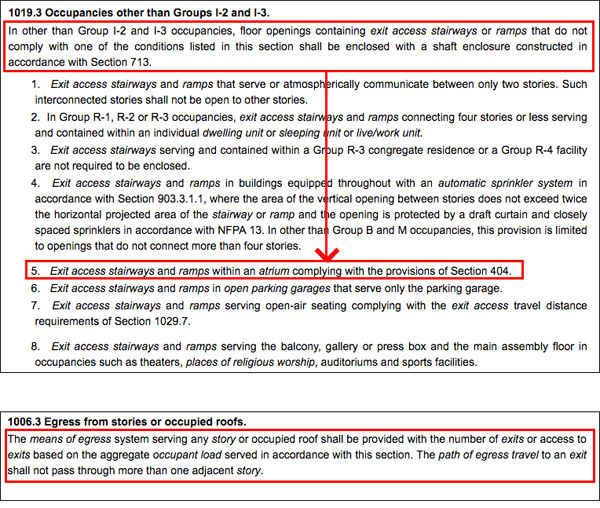 Fig. 2. IBC Section 1019.3 (top) allows unenclosed exit access stairways in atriums; but IBC Section 1006.3 (bottom) limits the number of adjacent stories that such a stair can pass through.

It is not unusual to find two sections in the building code where one section establishes limits not found in the other. For example, Section 506 (specifically Table 506.2) allows non-sprinklered (NS) Type IA, IB, IIA, and IIIA Group A-3 occupancies such as libraries to have floor areas in excess of 12,000 sq.ft. However, Section 903.2.1.3 requires all Group A-3 occupancies with fire areas exceeding 12,000 sq.ft. to have sprinklers. So, in this hypothetical example, if you wanted to place a non-sprinklered, Type IIA library in a building with a floor area of 15,000 sq.ft., and only looked at the allowable area factors in Table 506.2, you might (mistakenly) conclude that it was code-compliant because Table 506.2 says nothing about fire area limits. It is only by checking Section 903.2.1.3 that you would realize that this building floor, defined as a fire area, would either need to be sprinklered or subdivided into fire areas no greater than 12,000 sq.ft. This latter section is not in conflict with the former section, but merely places limits on its applicability. The Group A-3 library would need to comply with both sections, and designers (or code consultants) cannot simply ignore one of the sections because they would prefer not to acknowledge the limits it imposes.  Code requirements relevant to this hypothetical example are documented in Figure 3. 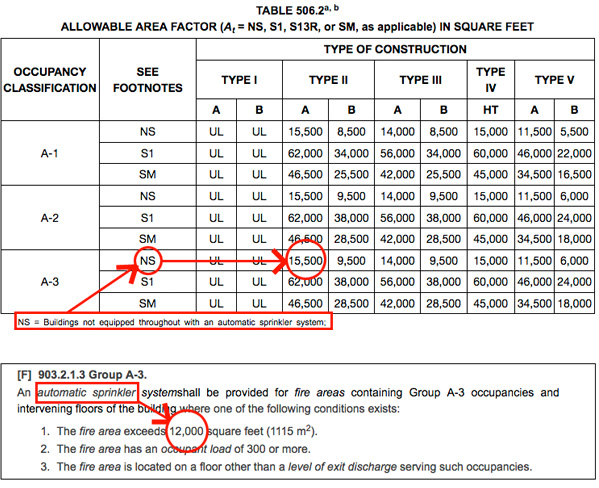 So there is no conflict. But even if a conflict is alleged between the two exit access sections cited above (i.e., 1006.3 and 1019.3), the building code has a remedy, and the outcome is still the same. Section 102.1 of the 2015 IBC states: “Where there is a conflict between a general requirement and a specific requirement, the specific requirement shall be applicable. Where, in any specific case, different sections of this code specify different materials, methods of construction or other requirements, the most restrictive shall govern.” Section 1019.3 does not specifically permit exit access stairways in atriums to pass through unlimited numbers of stories. It just says that if such a stair is not in an atrium (or any of the other seven conditions listed), then it must be enclosed in a shaft enclosure. It is mute on the question of whether exit access stairways in atriums can pass through more than one adjacent story; whereas Section 1006.3 specifically prohibits such a stair from passing through more than one adjacent story. The open stairs are therefore unambiguously noncompliant under the 2015 NY State Building Code because they pass through more than one adjacent story before finding an exit.

[Updated Jan. 23, 2018: I just had a follow-up phone conversation with James (Doug) Connell, P.E., Team Leader, A & E Services, International Code Council (ICC), Inc., Birmingham District Office. This office within the ICC provides expert analysis of the International Building Code to members of the ICC (I am a member). I had emailed him a schematic representation of the Fine Arts Library exit access stairway in Rand Hall showing an open stair from the 4th floor to the 2nd floor. He emphasized that even that exit access stair (i.e., without its proposed extension to the roof deck per Add-alt #6) was noncompliant with IBC Section 1006.3, since it “passes through” more than one adjacent story. In other words, an open exit access stair originating on the 4th floor must find an (enclosed) exit on the 3rd floor; otherwise, it is passing through more than one adjacent story and is therefore noncompliant. He made it clear that the stair’s  location in an atrium (per Section 1019.3) has no bearing on the limitations imposed by Section 1006.3.]

2. Add-alt #6 requires 1-hour horizontal separation from occupied roof
Under Add-Alternate #6, the atrium space needs to be separated from the occupied roof pavilion and occupied roof deck with 1-hour fire-resistance rated horizontal assemblies and fire barriers. In addition, all structural steel supporting the roof deck, including the deck itself, roof girders, and all steel columns supporting the girders, need to have a one-hour fire-resistive rating. I noticed that these structural elements in the atrium were specifically excluded from having any fire-resistance rating on working drawing number G-003, and I’m not sure if Add-Alt #6 included provision for this additional fire-proofing. It is required if the roof above the atrium is occupied, per IBC Sec. 404.6 and Sec. 711.2.3.

3. Smoke control conflict (Add-alt #6)
Exit access stairway “B” is within the atrium and extends up to the bulkhead (pavilion) on the roof in Add-Alt #6. It does not seem consistent with atrium smoke control requirements. Not only is it at the highest point in the atrium, where hot smoke naturally migrates, but it also contains an exit door which, when opened along with the exit door from the pavilion area itself, would draw hot smoke from a fire through the exit door at roof level, precisely in the path of occupants attempting to exit through that stairway.

4. Headroom question on Stair A to occupied roof (Add-alt #6)
Section 8 on Drawing Number 109 (Add-alt #6) does not clearly show a roof over the interior exit stairway, and also shows what looks like a brick obstruction drawn halfway across the door leading to the 4th-floor walkway to the stacks. It is hard to see how there would be sufficient headroom in the portion of interior exit stairway “A” leading from the enclosed part at the 4th floor level to the exterior pit where Stair “A” continues up to the occupied roof. I can’t find any drawings which provide definitive details, but unless the roof over Stair “A” is raised considerably higher, there appears to be a major headroom problem.

See this web page for links to all my writings and blog posts on the Rand Hall library proposal.