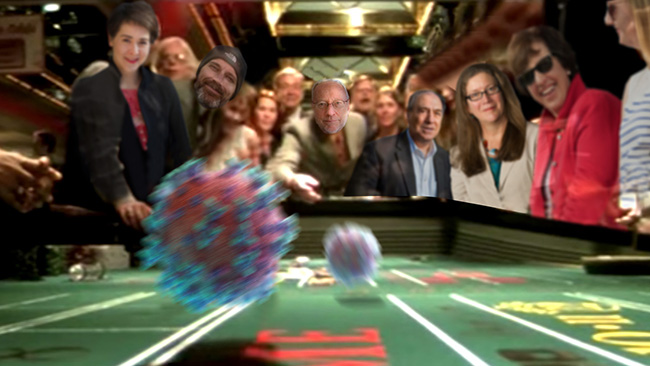 Administrators at Cornell University are going to extraordinary lengths to mitigate the negative impacts of viral transmission as they plan for an in-person start to the fall 2020 semester. They have created a Behavioral Compact that will require students engaged in in-person instruction to follow various safety protocols and to submit to asymptomatic testing once or twice per week. By reducing the density of classrooms and requiring social distancing and mask wearing, the expected number of infections, while still quite large, is considered by the University to be acceptable and manageable.

I am not arguing against the steps Cornell has proposed in order to bring students back on campus. Rather, my complaint is that Cornell administrators are being disingenuous when they claim to be “following the science” to minimize negative health impacts. Their basic argument, reiterated recently by Cornell President Pollack, can be summarized as follows:

Cornell’s “science” derives from the work of faculty in Operations Research and their PhD students, led by Prof. Peter Frazier, who have created a model—constantly being updated—that measures the amount of COVID-19 infections under various scenarios. It is beyond my expertise to critique this model, but it is also unnecessary. Even assuming that all the “scientific” or “medical” assumptions underlying the model are correct, there are flaws in the nonscientific and nonmedical assumptions imported into the interpretation of the model’s results.

Cornell’s “counterintuitive” decision to hold in-person instruction is justified by Frazier in the July 17 “Addendum” to his original June 15, 2020 report, entitled “COVID-19 Mathematical Modeling for Cornell’s Fall Semester.” For the online-only scenario to significantly outperform the in-person scenario, Cornell would need to test “at least 20% of the [Ithaca-based online] population per day, which seems out of reach with optional testing.”

This is actually an incredible admission: Frazier states unequivocally that implementing an online semester would “significantly [outperform] the residential scenario” if testing of Ithaca-area students occurred at a rate comparable to the rate already envisioned for the in-person scenario, for which adequate testing capacity is available. An online semester was rejected, even though it would “significantly outperform” the in-person scenario, not because there would be inadequate testing capacity. Rather, it was rejected based on the contention that “Cornell has no legal authority” over the conduct of online students and—even if they had the authority—Cornell could not adequately enforce a testing regime on students living in the Ithaca area and taking courses online. We’ll examine these arguments in turn, starting with the claim that “Cornell has no legal authority” to mandate asymptomatic testing of online students, a claim for which no legal evidence has been provided.

Finding myself at this impasse, I wrote to Madelyn F. Wessel, Cornell University Counsel and Secretary of the Corporation, and asked: “Why wouldn’t Cornell have the authority to block an Ithaca-based student’s access to online course participation if that student failed to comply with Behavioral Compact stipulations for asymptomatic COVID-19 testing?” The University Counsel’s reply, dated August 11, 2020, focused not on the question of authority, but on the practicality of implementation and enforcement, which we will discuss later. Only in the last paragraph of her long email she did finally acknowledge that Cornell has the authority to require testing of online-only students in the Ithaca area, contradicting statements made by the President and by Frazier: “Bottom line, yes,” she wrote, “we could exhort online students living locally to engage with the university’s significant health and safety protocols; we could probably make public statements to the effect that we were requiring testing and related compliance.”

Therefore, the only remaining questions concern practicality and enforcement. The following excerpts from Counsel Wessel’s email response are representative of the arguments made also by Cornell’s Provost and by Prof. Frazier; they are followed by my commentary in italics.

“Our assessment was that identifying which online students were ‘local’ and which were not would be exceptionally difficult to establish with specificity.” Cornell has already identified which students are local and which are remote, simply by requiring them to provide the address at which they are residing. This is not rocket science.

“And, any student who wished to evade university controls could easily do so by not disclosing their return to Ithaca.” Cornell could require that students provide proof of their residency—this could take many forms but would not be difficult to devise or implement. And, as in Jeremy Bentham’s panopticon, merely the threat of verification would be sufficient to deter infringement. It’s simply not reasonable to conclude that many students would go to all this trouble and risk disciplinary action, while simultaneously forging proof of residency documents, all to avoid asymptomatic testing.

“Additionally, to penalize – through academic disenrollment – an online student living in private housing in the Ithaca region, but not an online student living privately beyond whatever radius was necessarily established for the behavioral and testing regime, did not seem to us to be either practical or fair.” This argument has two parts: in terms of practicality, it would be easy to establish a boundary within which students are considered to be in the Ithaca area and subject to asymptomatic testing. Cornell is doing a lot of things to prepare for this upcoming semester that are far more complex. In terms of fairness, there is no ethical issue raised by protecting the Ithaca community from spread of this virus: this is, in fact, exactly what Cornell intends to do with in-person instruction. The idea, in both scenarios, is to reduce the health impact of instruction within the local Ithaca community—not within the entire planet. This ethical premise doesn’t change by altering the mode of instruction.

“It is precisely because Cornell is conditioning access to our physical campus, eateries, libraries, classrooms, dorms, student activities and more … that enables the university to require that they register their local address, adhere to testing, sign the behavioral compact, get their student ID activated for campus access, and become subject to the behavioral compact we are enforcing on Ithaca area residential students.” It is hardly necessary that students physically attend classes or use facilities in order to require adherence to a behavioral compact. Nor does enforcement require physical access to campus facilities; it would be quite simple to revoke online access if online-only Ithaca-based students did not comply with the testing protocol.

I therefore reach the following conclusions:

Links to all my Cornell-COVID writings are here.