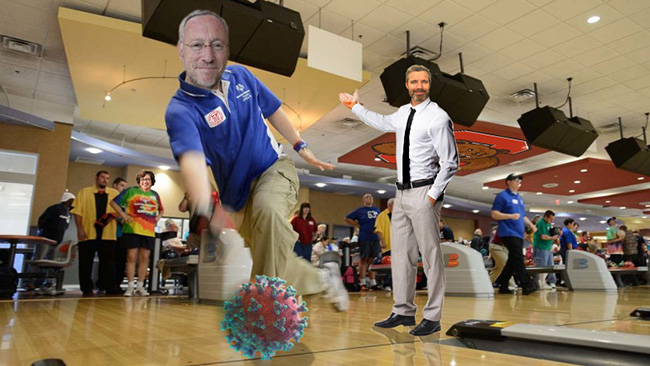 I’m not arguing against Cornell’s decision to reopen with in-person instruction for the fall 2020 semester (although it does seem like an incredibly dangerous strategy), but rather against their public relations campaign spinning this decision as something “based on the science.” The “science” turns out to be a study undertaken by Operations Research Professor Peter Frazier and his graduate students that models health outcomes resulting from various scenarios defined, as they must be, by making numerous assumptions. Aside from the uncertainty intrinsic to such models, the basic flaw in this pandemic restart analysis is that only two options are studied—(1) opening up Cornell and offering in-person instruction with required asymptomatic testing; or (2) closing down the campus and offering online instruction but without any asymptomatic testing for any students, even those in the Ithaca area.

It seems clear to me that a third option should have been considered: to close down the campus, offer virtual instruction, and require asymptomatic testing for students in the Ithaca area. It seems likely that this third option would result in the fewest COVID-19 cases, for the following reasons:

The model created by Frazier doesn’t mention the threat of superspreader events, which research suggests are extremely important in understanding how this virus spreads. Cornell’s protocols may reduce, but will not necessarily prevent such events, since students are tested only every five days (1/5 of the students get tested the first day, 1/5 the second day, and so on). Because such testing produces up to 40% false negatives even four days after infection, a student could become infected, say, three days before their scheduled test, receive a (false) negative diagnosis, and become extremely infectious four days later, before their next scheduled test. During this extremely infectious period, the student may well remain asymptomatic while attending classes over the course of two or three days (depending on the timing of the onset of extreme infectiousness) and potentially infecting many others. By the time the student is tested, and the results become available, and contact tracing begins, a superspreader event could already have materialized and metastasized. [Update, Aug. 14, 2020: An Addendum to the original report by Frazier et al. adjusts testing frequency to once or twice per week, depending on the assumed risk. So, undergraduates may well be tested twice per week rather than every five days. Even so, it is still possible that an infected student can pass undetected through two asymptomatic tests and come to class highly infectious. Frazier also counters that superspreader events are built into the model, which is based on “real-world” numbers. However, the model still discounts classrooms as special sites of potential superspreader events; in fact, because of the 6-foot distance between chairs, classmates of positive-testing students will not be considered close contacts, and will not be subject to contact tracing!]

In fact, a recent Harvard-Yale study suggests that testing every two days, not every five days, would be necessary to adequately control infections in college settings. But even that scenario creates enormous complications (and expenses): “The greater difficulty lies in managing the overwhelming number of false positives that will inevitably result from repeated screening for low-prevalence conditions. False-positive results threaten to overwhelm isolation housing capacity, a danger whose gravity increases with screening frequency.” In more recent communications, Cornell says that “students … will be tested either once or twice a week,” which is slightly better—or slightly worse—than the 5-day frequency originally modeled.

And this is precisely why the third option would likely have better results than an in-person model with testing every five days or every week: with virtual instruction, it is not possible to have in-class superspreader opportunities. Of course, people can still behave badly and break the rules outside of the classroom, but such misbehavior would apply equally to all the other scenarios as well. The main difference—that was not considered in Frazier’s model—is precisely the risk of superspreading events in classrooms, especially in those classrooms without operable windows and with modern HVAC systems that are designed to minimize the amount of fresh air (in order to be more energy-efficient). Cornell has not released detailed building-by-building assessments of ventilation systems in all its classrooms, so we cannot know how serious they are about providing adequate fresh air changes per hour (ACH), and whether their HVAC systems can even reach optimal ventilation targets. And Cornell has not even stated what their ventilation targets are.

Evolving research on the efficacy of mask wearing indicates that wearing anything other than N-95 respirators, while better than nothing, is not nearly as effective: “The general public should be educated about mask use because cloth masks may give users a false sense of protection because of their limited protection against acquiring infection.” And six-foot social distancing guidelines, while helpful, are also not necessarily adequate when aerosol transmission in indoor settings is factored in. None of these contraindications are considered in Frazier’s model.

Cornell is already requiring all students, whether taking classes in-person or virtually, to sign a behavioral compact and provide their Ithaca address, if they have one. Yet Cornell refuses to consider the option of testing such students taking online courses in the same way that they test students taking in-person courses: “Frazier said the university still could choose to ask [online-only] students where they are living and attempt to enforce asymptomatic testing for those living in Ithaca. But students could misrepresent where they are residing, and the spotty enforcement could result in outbreaks. The model assumes students in Ithaca are entirely outside the university’s testing purview.” It is this assumption—that “students could misrepresent where they are residing”—that is offered without evidence; i.e., pulled out of thin air. And it is on this shaky foundation that Cornell’s entire conclusion about the superiority of in-person instruction rests.

Cornell clearly wanted to reach this conclusion even before Frazier’s report was published. Just read what Provost Michael Kotlikoff emailed to the entire Cornell Community at the end of April, 2020, two months before Cornell’s announcement of its re-opening based on “science” and one and a half months before Frazier’s report was completed: “As we engage in detailed planning, we are very mindful of the ways in which residential experiences are a hallmark of campus life and provide students with crucial opportunities for formative personal growth. Significant efforts are being devoted to planning aimed at enabling our residence halls to reopen in the fall. As President Pollack noted in her message from last week, the university has established four planning committees to help us to determine the best path toward reopening. We remain hopeful that, working with public health and other scientific experts, we will be able to resume campus operations and welcome students back to our campuses for the start of the fall semester.”