[Updated below] Aside from limiting the fuel within a given fire area through various compartmentation strategies, a fundamental component of all fire safety requirements is to provide protected paths of escape (egress) for building occupants in the event of a fire incident. The number and characteristics of these so-called means of egress depends on several variables, including the type of occupancy and the number of occupants. The large critique (crit) space under the dome of Milstein Hall (Rem Koolhaas, OMA architects) does not seem to meet these egress requirements.

The number of occupants in the crit space should be taken as the larger of (a) the actual number of anticipated occupants or (b) a number found by dividing the floor area of the space by the tabular floor area per occupant found in Table 1003.2.2.2 of the 2002 Building Code of NYS (Maximum floor area allowances per occupant). Following are the tabular values for assembly spaces — and the crit space certainly seems to count as an A-3 assembly space:

The most generous interpretation for the occupant use of this space would be “chairs, not fixed” with an allowance per occupant of 7 square feet. This corresponds to the reality of such critique assembly spaces, which can be crowded with students and faculty reviewers. Assuming an approximate floor area of 3,600 sq. ft. (the actual area may well be closer to 4,000 sq.ft.), the number of occupants in this space is 3600 / 7 = 514.

For any Group A or B space with 51 or more occupants, at least 2 exits from the space are required. Per Table 1005.2.1, three exits are required for 501-1000 occupants. Therefore, at least two, and possibly three, exits are needed from the crit space. It’s hard to imagine having more than 500 occupants in that space, as there are not that many architecture students in the entire program, but even with less than 500 occupants the requirement for two exits appears, at first glance, not to be met.

According to Section 1004.2.2.1 of the Code, and assuming that only two exits are needed, these two exits must be “placed a distance apart equal to not less than one half [or one third for this sprinklered space, per exception] of the length of the maximum overall diagonal dimension of the building or area to be served.” 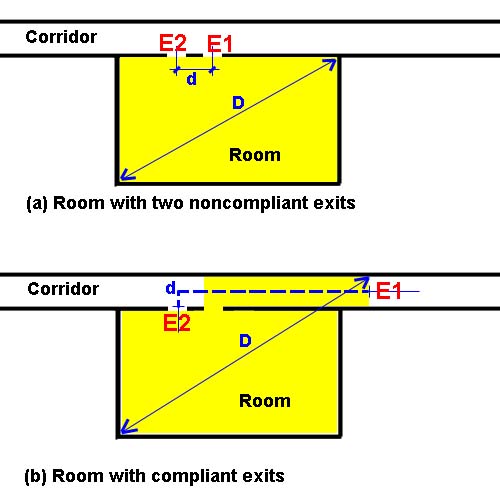 Figure 1. Schematic plans showing how two noncompliant exits can be made compliant

As can be seen in Figure 1a, two exits from a room with more than 50 occupants cannot be placed next to each other, since the distance, d, must be at least one third the length of the diagonal distance, D. But what if we pretend that the room actually extends into the corridor, as shown by the shaded yellow area in Figure 1b? In that case, the two exits are now still not compliant, since even though one of them, E1, has been “moved” far enough away such that the distance, d, is now greater than one third of the distance, D. Nothing has changed to make the room safer, but and the exits are now still not compliant.

Of course, one needs One would need to stretch beyond plausibility the definition of a corridor to make this work. A corridor is a type of exit access, which the Code defines as follows: “That portion of a means of egress system that leads from any occupied point in a building or structure to an exit.” It seems clear that the corridor shown in Figure 1 really is acting as a corridor, and not as a part of the room. But the main point is this: even if the corridor is envisioned as “part” of the room, the egress situation remains noncompliant, because the occupants of the space still need to pass through what amounts to a single exit, rather than having two exits available. [see update 3 below] But how does this apply to the crit space in Milstein Hall? 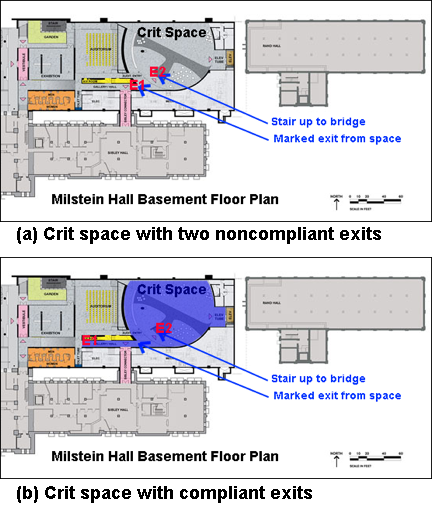 Figure 2. Milstein Hall plans showing how two noncompliant exits can be made compliant

If the second exit from the crit space is assumed to consist of the unenclosed stair leading to the bridge above the crit room space, this second exit (marked E2 in Figure 2) does not appear to conform to the requirement that it be a minimum distance from the first exit (marked E1) — this distance determined by dividing the maximum diagonal length of the room by three.

To solve this problem, the architects for Milstein Hall have attempted to use used the trick outlined above: as explained to me by Cornell’s Project Director for Milstein Hall, the crit space actually extends into what appears to be the corridor leading to the exit (see Figure 2b with the extent of the crit space shown in blue). In fact, there are even felt pin-up walls in this “corridor” to lend credence to this interpretation. Even so, the safety of the crit space appears to have been compromised by this imaginative Code interpretation.

[Update: Oct. 13, 2011] As I describe in a later post, the smaller crit spaces formed by new partitions also have egress problems.

[Update 2: Oct. 13, 2011] One might have more sympathy for the architects’ contention that the crit space actually extends into the corridor if they had indicated this intention on their plans. In fact, they label the corridor separately from the crit space (calling it a “gallery/ hall”) as can be seen in this annotated screen shot taken from Cornell’s Milstein Hall website: 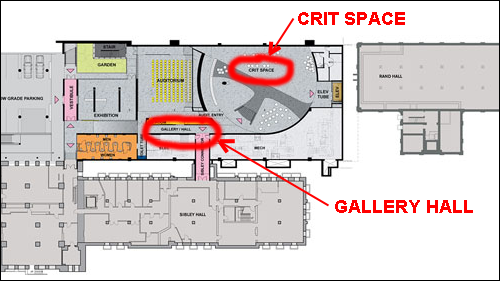 [Update 3: March 1, 2012] The deleted text and bold-face additions above are intended to clarify the point that I was trying to make: that the crit space under the dome in Milstein Hall (or any similarly configured space with more than 49 occupants) is noncompliant with egress regulations in building codes. This judgment was recently supported by a Code expert from the International Code Commission (which publishes the International Building Code upon which the New York State Building Code is based); I will publish his written opinion as soon as I receive it [the Code opinion can be found here].