I’ve posted two new papers for your reading pleasure. “Utility’s Evil Twin: The Function of Venustas and the Fear of Reality” was first published in the Cornell Journal of Architecture: 11 (March 2020). “Sullivan’s Eagle: Form and Function Artistically Considered” was accepted for the Proceedings of the 108th Annual Meeting of the ACSA but that San Diego conference, originally scheduled for March 2020, was postponed/canceled because of the coronavirus.

I was only marginally aware of Warren Zevon back in 1978 when he released his Excitable Boy album, which contained the song, “Lawyers, Guns and Money.” However, I did become a fan later, and I offer this more-or-less acoustic cover consisting primarily of vocals, guitar, and harmonica. I did add a bit of kick drum and bass to provide some propulsion in certain places; also I added some organ and piano in the bridge and some piano in the fade-out. These instruments (kick drum, bass, organ, and piano) are actually so-called software instruments played live on my midi-enabled Yamaha P-60 digital piano. I mixed it all using Logic Pro X and shot the video with my new iPod Touch, edited using Final Cut Pro. Oh, and the hand claps are really just my hands clapping.

Links to all of my songs can be found here.

I decided to enter the NPR Tiny Desk contest by submitting a video of an original song. My entry is a song I wrote in 2008 based on a game of Scrabble. In fact, this was the first time that my daughter Jennie beat me, and she beat me on her last turn by placing the word “SQUINTS” on a triple-word square, with the letter “Q” on a double-letter square. As all Scrabble players know, “squints,” being a seven-letter word, gets you 50 extra points; doubling the value of “Q” gets you 20 points; and placing the whole thing on a triple-word square, well, that gets you so many points that—although I was comfortably ahead at that point and assured of victory—I actually lost the game in dramatic fashion on the last play. So, here’s the new video, live and acoustic (the original video and recording from 2008 can be found here).

I have identified nine serious life- and fire-safety violations in the newly-opened Mui Ho Fine Arts Library at Cornell University and am still unable to appeal the ruling of New York State’s Division of Building Standards and Codes (DBSC) because the DBSC has not completed their “re-opened” review of the case. Here is what I wrote to them today:

It has been three months since our last conversation in which you said that some aspects of the Rand Hall Fine Arts Library case had been “re-opened,” that you were not “leaving any stone unturned,” and that your work was close to being done (i.e., that you would likely be finished before January 2020). I have also been told … that “there has been a request by DBSC for additional information from the consultants that provided the smoke control modeling for the project.” As I wrote in my email copied to you on Feb. 11, 2020, I believe that my complaint should be adjudicated based on whether the City of Ithaca appropriately granted a building permit, irrespective of whatever documentation may have been provided after my complaint was filed.

The Mui Ho Fine Arts Library in Rand Hall at Cornell University remains unsafe, noncompliant, and presents a clear danger to its occupants. For that reason, I am eager to appeal the ruling of the DBSC Oversight Unit (Complaint #4660). Please let me know (1) the status of my complaint, (2) when your “work” will be completed, and (3) your specific reasoning for discounting each of the nine code violations that I described in detail. Please provide answers in writing: your prior requests to “give me a call at your earliest convenience”—on Nov. 5, 2019 and Dec. 3, 2019—have proven to be unsatisfactory.

Links to all of my writings on Cornell’s Fine Arts Library can be found here.

I asked about the upskirting potential of the Fine Arts Library at Cornell University before it opened, and was told that the issue had been carefully studied and that the architects insisted that the floor grating could not be seen through. Well, reality has a nasty habit of correcting such obvious falsehoods, as you can see in this video I took of myself in February 2020.

I’m up to 1977 in my chronological quest to record songs that were influential in my musical development. The rule I’ve set for myself is that I can only record one song by any given artist or group, and only one song for each year. This particular choice has a rather nasty lyric, but—what can I say—I’m a sucker for these rock ballads.

Links to all my music can be found here.

This is a song that I started writing in high school (1970 or earlier) but only finished this month—50 years later. I had only written the chorus, so the verses and bridge are new.

More details, including lyrics, are here.

It’s been a month since our last conversation in which you said that a “response letter” was being finished up and would be sent to me. We discussed waiting for this letter to be sent, and resolving the question of whether I had standing, before I submitted a formal appeal to the Syracuse Regional Office.

Please let me know when this response letter will be completed and whether your “legal people” have determined if I have standing to bring a complaint.

It has been eight months since I submitted a formal code complaint with the City of Ithaca Building Division and six months since I filed a formal complaint with the New York State Division of Building Standards and Codes. In all this time, I have not received a single substantive response to any of the nine code violations that I described in my complaints. I have shown in each of these nine instances how specific sections of the New York State Building Code have been violated. Not even one specific allegation that I have made has been challenged with a coherent counter-argument. In fact, James Harding of the New York State Division of Building Standards and Codes has confirmed that my reasoning in Violation #1 (Unenclosed egress stair in the atrium) and Violation #4 (Lack of 1-hour fire-rated construction between the atrium and roof-top spaces) is correct.

In my view, the Mui Ho Fine Arts Library in Rand Hall at Cornell University is unsafe, noncompliant, and presents a clear danger to its occupants. For that reason,  I am eager to appeal the ruling of the DBSC Oversight Unit (Complaint #4660), and await your response letter in order to pursue this appeal.

[Update Dec. 4, 2019: I spoke to Brian Tollisen, at his suggestion, later on Dec. 3, 2019. He said that some aspects of the Rand Hall Fine Arts Library case had been “re-opened” and that they were not “leaving any stone unturned.” He also said that their work was close to being done, so that I should expect to hear from them in the near future. We’ll see.]

All my writings about the Mui Ho Fine Arts Library are linked from this webpage.

Well, I’m up to 1976 in my series of musical covers: that means The Royal Scam album by Steely Dan, from which I’ve selected “Don’t Take Me Alive.” I  needed to lower the key 5 semitones, since I don’t have Donald Fagen’s rock ‘n’ roll voice, and I attempted to “interpret” the amazing guitar work of Larry Carlton on keyboards—really an impossible task. I recorded the song live—i.e., keyboards and vocals simultaneously—after recording a drum track using Logic Pro X. After that, I added a bass line (played on my MIDI keyboard) and some background vocals. That’s it. The video was created using Final Cut Pro; the introductory police scene is taken from a YouTube video of the Kalamazoo police surrounding a condemned building. I found the police sirens from another generic YouTube video created for that purpose. Links to all my music videos are here.

An article in the Cornell Daily Sun reports on the obvious: that the Mui Ho Fine Arts Library that was recently completed in Rand Hall at Cornell University is, in many ways, dysfunctional. The Sun mentioned the architect’s specification of see-through steel grating for all stack-level floors. I have written previously about the fire-safety implications of such floor construction, but the Sun article focuses on the ability of people to look up through the gratings at women wearing dresses. (I’m mentioned in the Sun article as Prof. “Oschorn.”) 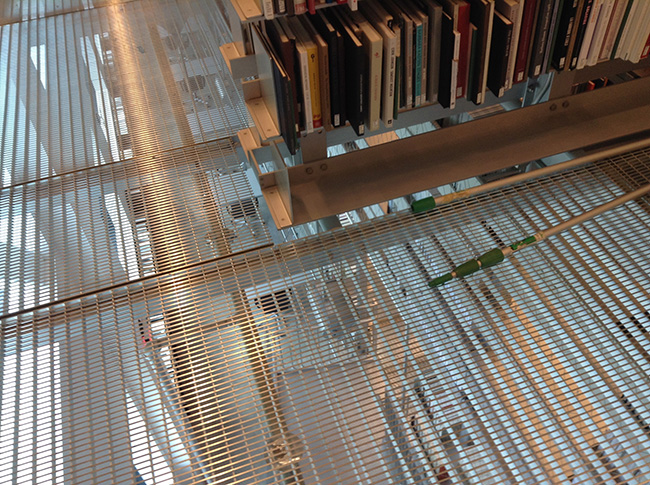 All of my writings about the Rand Hall Fine Arts Library can be found here.